On 31 May, it was announced that Bradford had been crowned the UK City of Culture 2025. The award is fantastic for highlighting a city’s local culture and history and has been found to play a great role in raising civic pride – for that, it should be welcomed. However, we should be very wary of claims that it will bring an economic boom too.

These claims of an economic bonanza have been made in previous City of Culture rounds, and this time is no different. Bradford Council recently projected it could see a £700m gross value added (GVA) uplift from 2025 to 2030.

Whilst there are certainly short-term economic benefits that can arise from a rise in visitor numbers, the long-term economic benefits to cities are likely overestimated. This is because the processes linking a city’s cultural sector and local economic performance are often misunderstood. Instead of culture being the driver of economic regeneration, it is economic regeneration that stimulates sustainable growth in a city’s cultural scene.

Cities with strong economies – specifically a strong ‘exporting’ sector – generate prosperity and put money in people’s pockets. This then raises demand for ‘local services’ such as high street shops and cultural activities. Previous work by Centre for Cities found that for every 10 new high-skilled exporting jobs created in Britain in the period between 1998 and 2015, 17 new jobs were generated in lower-skilled local services.

This is very clearly seen across the country. Data from DataCity provides much more specific and up to date definitions of what businesses do at the local level than official statistics, providing both estimates of which ones are innovating (likely to be higher-skilled exporting activities such as software or fintech companies) and more specific definitions of different local service activities. The data shows a positive relationship between more traditional local service activities of theatres and book shops and the number of innovative companies in a city – the stronger the export sector, the more money there is to spend on these local services (see Figure 1).

At this juncture it could be argued that the causation runs the other way – that theatres and book shops attracted the innovative companies in. But data on yoga classes, a relatively new local service, challenges this. While Cambridge may be Britain’s yoga capital, closely followed by Oxford and Exeter, this new title is long predated by the strength of their export base. People need money to spend before they can spend it on premium-priced stretching. 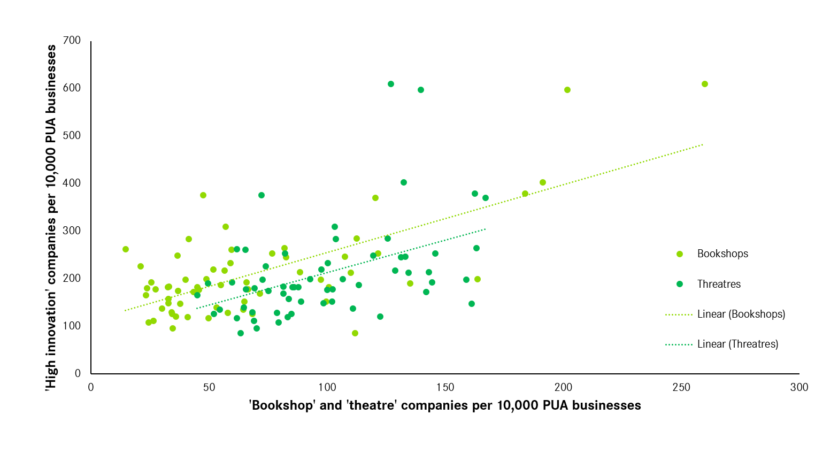 Although the City of Culture designation can boost civic pride and bring about a short-term economic boost from greater tourism and footfall, it is unlikely to instigate long-term economic rejuvenation – and we shouldn’t unfairly expect it to do so.

For struggling places to really achieve lasting economic change, they need to address the barriers that prevent investment from higher-skilled exporting businesses in sufficient numbers.  For most, this requires addressing high shares of their residents with few or no formal qualifications – something City of Culture is not designed to do. Only then would this increase prosperity in an area, ensuring increasing demand for cultural amenities follows as a result.