This week we’ve launched the tenth annual edition of Cities Outlook, focusing this year on how cities trade with the world.

The debate over trade deals has intensified in recent weeks as the UK looks to set out its position in the world once we leave the EU. Whatever trade deals are struck in the coming years, they’ll have very different impacts across the country. Cities Outlook 2017 reveals for the first time where our cities send their exports.

It shows that the EU is by far the biggest market for British cities. As a group, 46 per cent of their goods and services exports cross the Channel, and the EU is the primary export market in 61 out of 62 cities, the EU is its largest market (the exception being Hull).

There is, of course, variation across cities. Exeter is the most dependent on EU markets, which buy 70 per cent of its exports, with South West neighbours Plymouth and Bristol following closely behind. At the other end of the list is Derby. However, it’s worth noting though that it still sends one quarter of its exports to EU countries, and the EU remains its largest market. 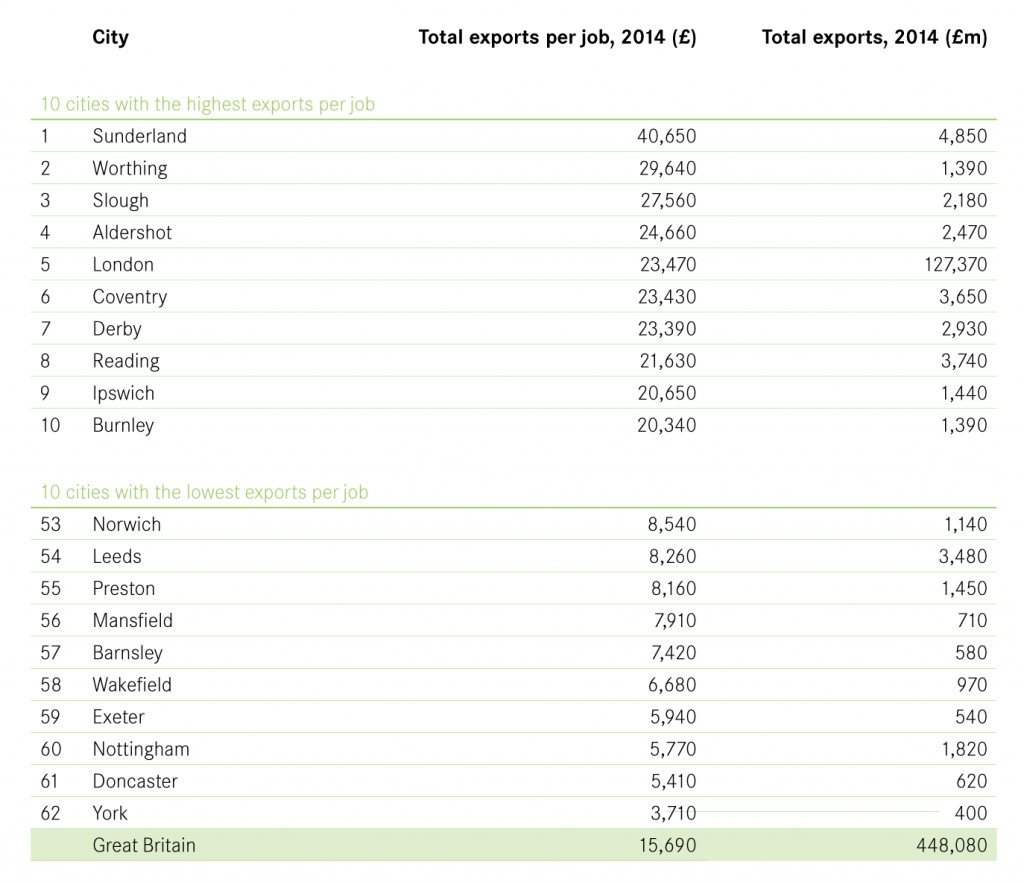 Much of the recent discussion about trade by ministers has of course been about the opportunity that Brexit provides to strike deals with other countries. This has intensified with Theresa May’s visit to the USA last week, with much talk of the potential trans-Atlantic trade deal. Our data shows that the US is an important export destination for cities – as a group they sell 15 per cent of exports to America. Hull is the city which is most dependent on US custom sending almost half of its exports over the pond. That said, the American market is one third of the size of the EU one, meaning that if there was a fall in EU orders because of trade barriers, there would have to be a significant increase in trade with the US to offset this.

Last week’s industrial strategy also named a group of other countries – Canada, China, India, Mexico, Singapore and South Korea – that have said they went to discuss a trade deal. Notwithstanding how long such deals would take to negotiate, they currently account for an even smaller share of British urban exports – just 10 per cent of goods and services from cities head for these markets. Some cities would benefit from such deals – Birmingham, Coventry and Telford send more than a quarter of their exports to these countries (although almost all end up exclusively in China). Although exports could and hopefully will grow over time to these countries, in the near future these deals would make little difference to how much the majority of cities sell, the jobs they create and the wages they pay.

This data shows that securing the best possible EU trade deal will be of greatest importance for almost all of our cities. It’s right to be ambitious about increasing exports to countries such as the US and China and we should look to do so in the years ahead, but the outcome of EU trade negotiations will have a much bigger impact on places and people up and down the country.