The priorities that influence where people want to live are changing – and this is changing our cities. After decades of urban decline which saw city centre populations fall, people are moving back into city centres right across England and Wales – and particularly into large cities (as the chart below shows).

City centre populations of cities in England and Wales, 1971-2011 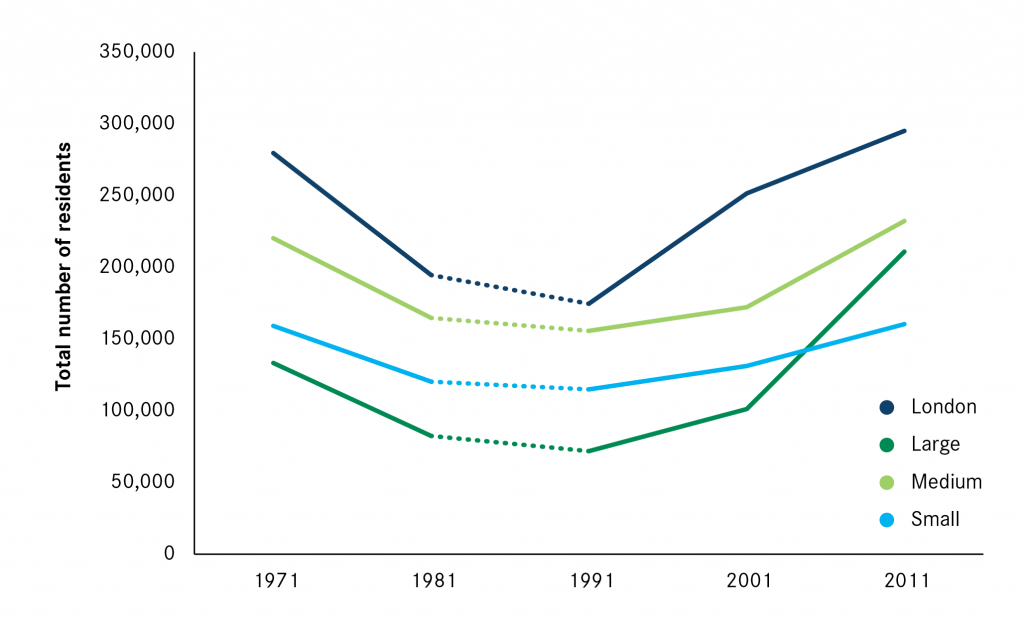 The growing appetite for city centre living, which we explored in our recent report Urban Demographics, has been driven by students and young people, who want the benefits of living close to restaurants, theatres and workplaces. And in the cities where demand for city centre living is very high, it pushes up demand for housing: in London, for example, residents pay 69 per cent more to live in the city centre than in the suburbs.

This presents a challenge for city policymakers. The growing demand for city centre living is increasing the competition for land and space – most particularly between office space and housing. This is because city centres are also the places where firms increasing want to locate, as the jobs map of Manchester below shows.

The geography of jobs across Manchester 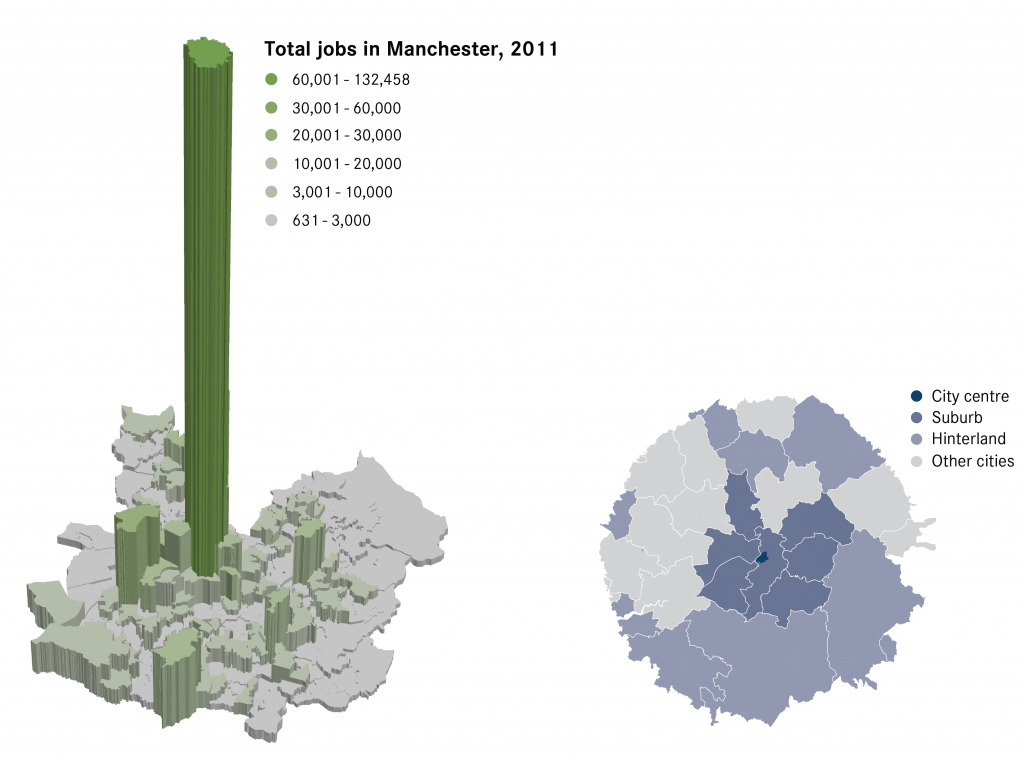 Why is this increasing competition for space in city centres a problem? As dense locations of activity, city centres offer agglomeration benefits of proximity and knowledge spillovers – and these are particularly valuable to new knowledge-type activities, such as law, finance, digital, software and consultancy, rather than more traditional industries such as manufacturing or distribution. As such, knowledge-intensive businesses are more likely to locate in city centres, and with a globalising economy and the automation of jobs likely to drive the continued specialisation of the UK economy into high-skilled, knowledge-type activities, demand for city centre office space is likely to increase in the future.

The maintenance of existing city centre office space, then, is crucial for cities that wish to support long-term economic growth. But as a result of specific national policies, the ability of cities to maintain an appropriate balance between residential and commercial space is under threat.

Permitted Development Rights have long existed as a way of changing the use of a building or adding extensions without full planning permission. In May 2013, it was extended to include the conversion of underused office space to residential (or use class C1a to C3, for the planners reading the blog). In many places, it’s a useful tool – it makes the most of vacant space in city centres, and takes away some of the risk and planning costs associated with brownfield development.

Despite reassurances that it wouldn’t lead to a spike in planning applications, local authorities were concerned about the effect that this policy would have on city centre office stock in their places. As a result, 165 local authorities applied for exemption zones from PDR, but only 17 were granted by the Secretary of State. In many places, their initial concerns appear justified: the chart below illustrates how its effect in London has been substantial. 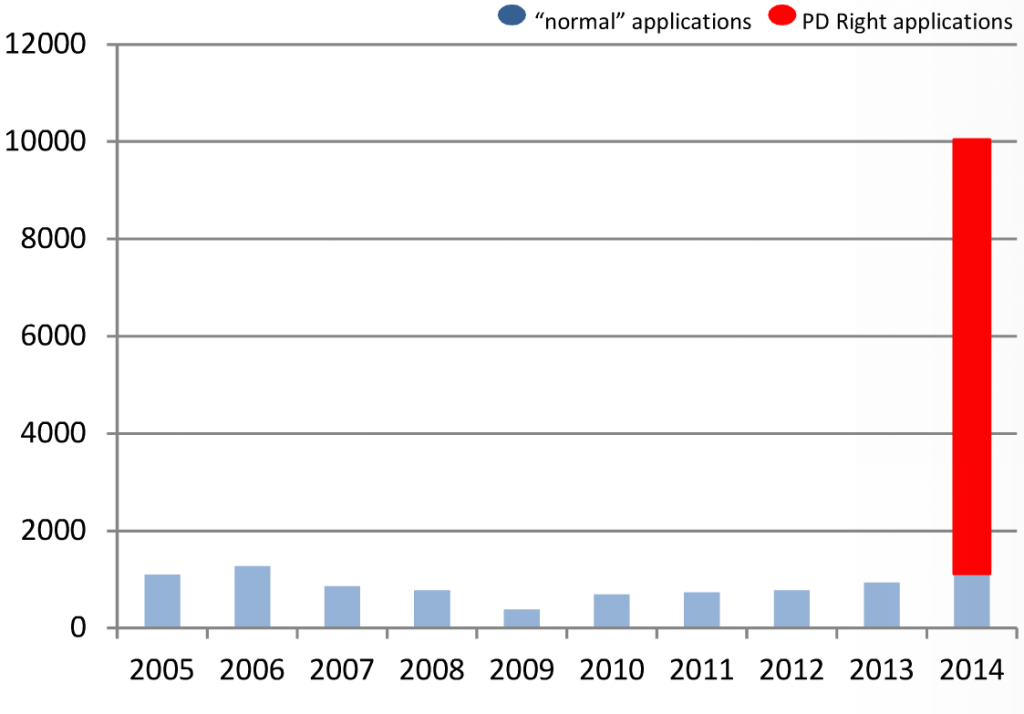 Viewed from the perspective of the housing crisis, it’s a positive thing. The conversion of buildings such as the Shell Centre and CentrePoint in London into new flats contributes to new housing supply – which is absolutely crucial if unaffordable cities are to address the  worsening housing crisis. But the conversion of offices into housing reduces the space that can house new city centre businesses, and cities have limited powers to control this.

While local authorities can apply for Article 4 directions to challenge PDR applications, they are far from an ideal instrument. The process to grant one, which remains at the discretion of the Secretary of State, can take up to a year, and is granted only in exceptional circumstances. This leaves local authorities with very little control over the loss of office space to housing. And as long as land values remain higher for residential than for office space in city centres, the incentive will remain with the landlord to convert office space wherever possible.

These tensions are not likely to go away any time soon. With the changes to PDR being made permanent from next May, as well as being extended to include the demolition of offices as well as their conversion, local authorities are likely to continue to feel the pressure as they strive to preserve office space for businesses as well as deliver housing targets.

Neither is there any easy solution to the problem – demand for city centre living goes up with economic growth, and so both housing and office space will be crucial for growing city centres. But while many places in Britain are likely to benefit from the simplification that PDR brings, the circumstances are different in fast growing, high demand cities. Cities need the control and flexibility to manage city centre stock in line with their particular circumstances. The current legislation, which allows for crucial office stock in high demand cities to be nibbled away, is not flexible enough to ensure protection in the places that need it most.