Reducing carbon dioxide emissions has been a priority for leaders across the world in recent years, as they seek to slow the effects of global warming. The UK has made good progress against its targets, with CO2 emissions being 27 per cent lower in 2015 than 2005. But how has this played out across cities?

Cities Outlook 2018 sets out the latest data on carbon emissions. It shows that cities tend to emit less CO2 per capita than the rest of the country – accounting for 54 per cent of the population but 46 per cent of emissions. This is mainly due to low shares of emissions in urban areas from industrial and commercial activities (44 per cent of the national total) and transport (39 per cent).

As well as emitting less CO2 per person than other areas, a decade of data shows that the UK’s cities have also led the reduction seen in national CO2 emissions. As a whole, UK cities have reduced their emissions by 29 per cent from 2005 to 2015, 2 percentage points more than national average.

Exeter has been the top performer, seeing its emissions fall by 44 per cent. It is followed by Blackburn, Newport and Telford. At the other end of the scale is Swansea, which was the only city not to see a reduction in its emissions.

These changes have mainly been driven by a large fall in emissions from businesses. As the chart below shows, industry and commercial activities accounted for over half of the overall reduction in most cities, and were particularly large in Exeter and Blackburn. Meanwhile, Slough and Swansea were the only two cities to see an increase from this activity. 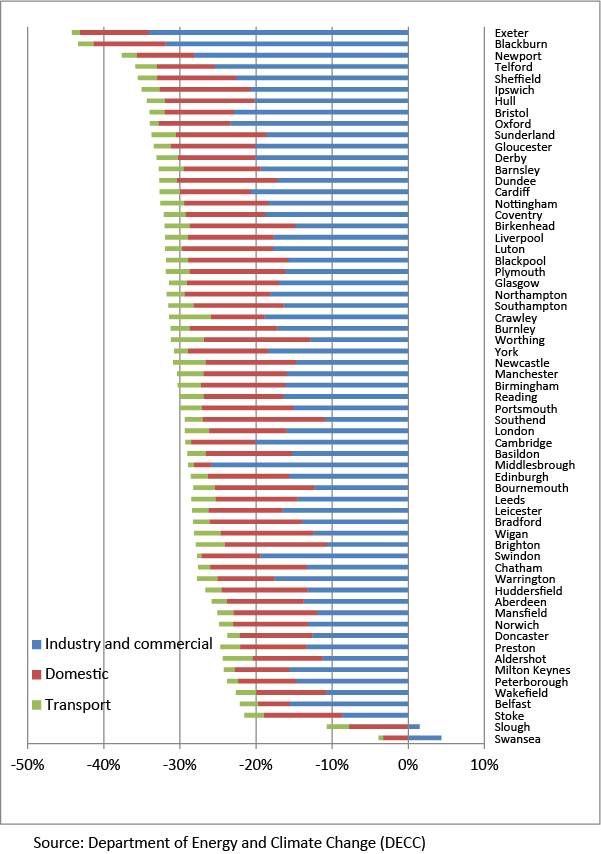 Reductions in emissions from transport, on the other hand, have been much more modest, making up only a small proportion of cuts in all cities. This has contributed to transport’s share of national emissions rising from a quarter of all UK CO2 emissions in 2005 to a third in 2015.

Despite good progress in cutting its overall CO2 emissions, the UK still has a long way to go to meet its 2050 carbon reduction targets, which poses an interesting policy challenge for local authorities. Some of this no doubt will be achieved by further reductions in industry, either through welcome developments such as efficiency savings, or from less welcome developments such as the closure of large facilities (for example, the closure of the Redcar steel plant, which is yet to show up in the latest data for Middlesbrough). There is little scope for local policy to influence this.

But it will also mean that there will need to be larger cuts to emissions from transport sources in particular, which have contributed very little to CO2 reductions over the last decade. There is a much clearer role for city leaders here – mostly around reducing use of petrol and diesel vehicles. Actions they can take include:

There has rightly been a focus in recent months on the need to tackle public health problems through improving air quality in urban areas. But cities also have an important role to play in addressing climate change and helping the UK achieve its 2050 carbon reduction goals too. For many places this will require a rethink on how they plan their cities and the level of public transport they provide.