The last century has seen a dramatic shift in the nature of work taking place in our cities. In 1911, many cities were centres of mining and manufacturing. Today our most successful cities are centres of services.

In this three-part blog we’ll look at how this shift has taken place over the last century, the role that policy has played within this, and what it means for cities today.

Back in 1911 agriculture, mining and manufacturing accounted for the vast majority of jobs in a number of our cities. As the table below shows, three in four jobs in Burnley were in these areas (dominated by textiles). It was a similar story in Burnley’s neighbouring mill towns: the top five cities were all in Lancashire. 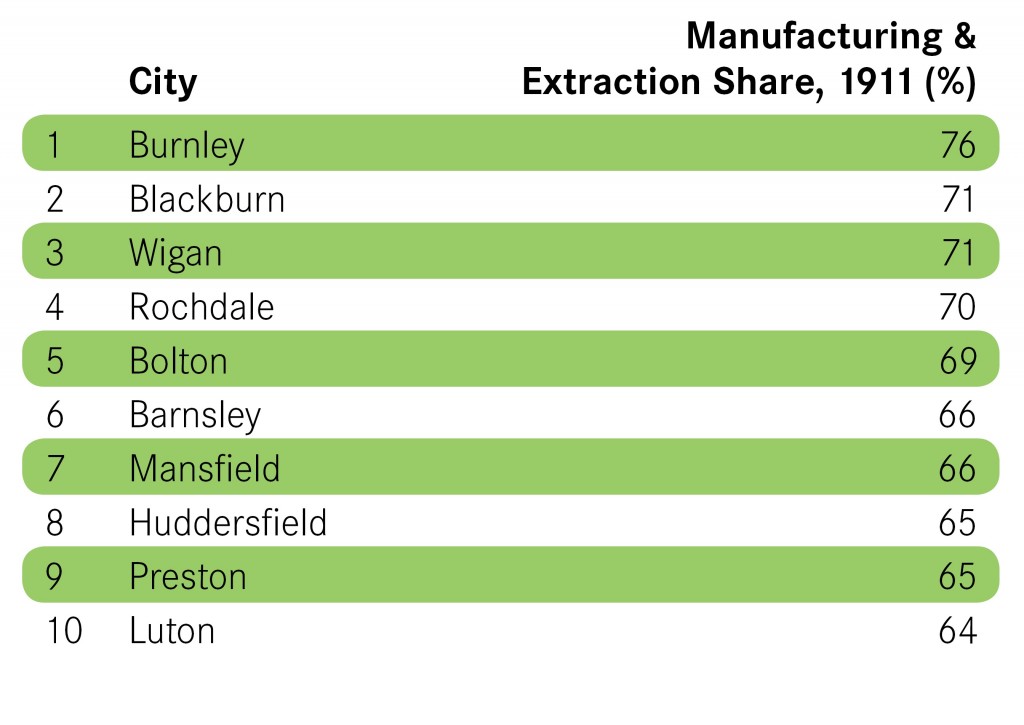 The Great Depression of the 1930s hit mining and manufacturing hard. And given the geographic concentration of these industries – nine of the 10 cities above are in the North or Midlands – the impact was most heavily felt in northern cities. These struggles are most evocatively captured in the images of the Jarrow Marchers, who walked from the Tyneside town to Whitehall to protest about high unemployment in the North East.

It was the geographic impact of the Great Depression that inspired the very first ‘rebalancing’ policy from central government. In 1934 the Special Areas Act offered government support to industry in areas of high unemployment, creating trading estates such as Team Valley in Gateshead. And because of its focus on manufacturing in the North, this intervention has set the tone for regional policy ever since.

In 1945 the Distribution of Industry Act, coupled with the introduction of industrial development certificates, attempted to restrict the building of new factories in the South in the hope that they would be built further north instead. In 1964, the ‘Brown Ban’ attempted to do the same for offices. In 1967, the Regional Employment Premium subsidised wages for manufacturers that set up in struggling areas. And in 1972, Regional Development Grants offered similar subsidies for machinery and buildings.

With the benefit of hindsight we can see that while policymakers were busy implementing this array of policies aimed at supporting manufacturing in the North, big shifts in the global economy meant that competition from abroad began to squeeze UK industry. The interwar decline of the textile industry had already hit the North West’s cotton towns hard, while the struggles of mining were squeezing jobs in the coalfields. But there was more to come. Between 1971 and 1981, jobs in manufacturing in England and Wales declined by around 1.7 million, despite the Government’s propping up of the automotive and shipbuilding industries (and before the election of Margaret Thatcher).

The election of the Thatcher Government signalled a complete about-turn in economic development policy. Not only was an explicit policy focus on the regions dropped, but the manufacturing sector was opened up to the full force of global competition. In the previous decades, policy had attempted to shelter manufacturing from the world market, but this propping up of the sector only served to make the inevitable adjustment even sharper and more painful, with big implications for the performance of many cities. Between 1981 and 1991, Sheffield lost 40,000 net jobs in manufacturing, Manchester lost 82,000 net jobs in the sector, while in Birmingham the figure was 130,000. In absolute terms London was hardest hit, where there were 370,000 fewer jobs in manufacturing in 1991 than a decade earlier.

Thatcher is still chastised today in certain circles for the decline of UK manufacturing. Fair or otherwise, this is a misdiagnosis of the problem. From the point of view of city economic performance, the fault with Thatcherism wasn’t the lack of support for mining and manufacturing. Instead it was the lack of any policy approach to support cities to move to a more knowledge-based economy, particularly though skills policies, in response to the decline of their more traditional industries. While the former was a clear break with past policy, the latter was very much consistent with previous decades.

Manufacturing has continued to decline in employment terms since the end of the Thatcher Government because of the continuing rise of global competition. And this has radically changed the industrial make-up of our cities. Burnley still has the highest share of manufacturing jobs of any city, but the sector now accounts for just under one in every four jobs compared to three in four back in 1911. Meanwhile in other cities manufacturing’s presence is very small. In London, fewer than one in 30 jobs is involved in the making of goods.

Yet still, it’s very likely that whichever party leads the next Parliament, the language of boosting manufacturing, particularly in the North, will continue. Given this, the second part of this blog will look at what we should expect from manufacturing in the future and what it means for economic development policy.

Next blog in the series: What is the future for manufacturing in UK cities?

Previous blog in the series: Has UKTI left the North out in the cold?