The apprenticeship levy comes into force today as part of the Government’s efforts to hit its target of three million apprenticeship starts by 2020, by making big businesses foot more of the bill for creating these new roles.

Evidence from our sister organisation the What Works Centre for Local Economic Growth shows that apprenticeships can have a genuine impact in improving skills levels, stimulating further training and boosting both employment and wages for young people. The levy will be used to incentivise employers to create more such opportunities by subsidising at least 90 per cent of the costs incurred in off-the-job training.

However, concerns have been raised that the new reforms will not address the need and demand for apprenticeships where it is greatest – especially in Northern cities – or lead to more genuine training opportunities for young peoples across the country.

The geographical concerns about the levy arise from the fact that the lion’s share of employers who will pay it are based in London, with almost twice as many firms which are ‘very likely’ to be hit by the levy (i.e. those with more than 250 employees) located in the capital compared to the North East and Yorkshire.

Figure 1: Employers most likely to be affected by the levy

However, demand for apprenticeships in the North and Midlands clearly outstrips that in London and other Southern regions, with the latest figures indicating that in the North East and Yorkshire there are 1.6 times more applications from young people (16-24) per apprenticeship vacancy compared to London. This has led to fears that the revenue raised by the levy will be reinvested predominantly where it has been generated – meaning that places across the North (where demand for apprenticeships is greatest) would miss out in comparison to London. 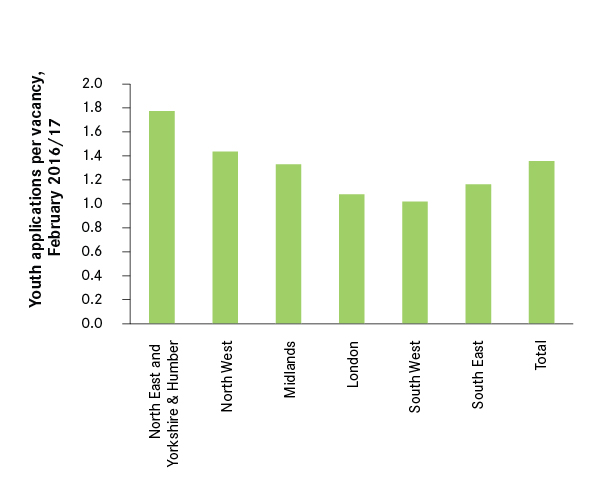 There are also concerns that the new levy – coupled with the pace of the Government’s drive to increase apprenticeships – may result in businesses simply rebadging current training schemes as apprenticeships. This could result in less training opportunities being made available for young people, especially as the new reforms will give employers a bigger incentive to employ apprentices aged 19 or over (for whom the Government subsidy was previously 50% or lower).

So what can local authorities, businesses and training providers do to ensure that these potential pitfalls are avoided, and that the new levy creates more high-quality apprenticeships in places where they are most needed?

Firstly, there must be a significant drive to raise awareness of the 90% subsidy available for non-levy paying firms – and the wider benefits of employing apprentices – especially in places across the North where the demand for apprenticeships is greatest. This will encourage more employers to get involved in the scheme and to create more opportunities for young people.

Secondly, local partners have an integral role in ensuring the levy revenue is used to prioritise new high quality apprenticeships, rather than focusing on simply driving up total numbers of apprenticeships. For example, LEPs and combined authorities can take steps to match employers with training providers, to get businesses on board as champions of the scheme, and to assist smaller businesses with recruitment and HR or improving the quality of careers advice.

There are multiple examples of the ways in which cities across the UK and internationally are already doing this, and we need to find ways to monitor success and continue to share best practice so that more businesses and communities can benefit. Overlooking the role local leaders can play in supporting the introduction of more high quality apprenticeships risks wasting the opportunity that the programme presents to tackle some of the big skills and employment challenges cities face.