Today is Cities, Regions and Built Environment day at COP26. After two full-on weeks during which world leaders gathered in Glasgow to discuss targets, pathways, mitigation, transition to green energy, innovation and green finance, the conference concludes by bringing together national and local governments with one overarching question: what role should cities play in the race to net zero?

As the Centre for Cities has published a wide range of research on this topic in the run up to COP26, here’s our answer (and a summary of what we have learnt):

1. Cities should be at the heart of the net zero transition

It is not uncommon to read that cities will have to play a key role in cutting carbon emissions; but often the reason given is that cities account for an increasing share of the population, and will therefore have to be responsible for most of the cuts needed. While this is true in parts, the other (more positive) side of the coin is often missing from discussions: that cities also have the potential to do so, because they are good for the environment, and that a growing urban population is far from being bad news for the planet.

In the UK, cities account for 45 per cent of carbon emissions. This may sound like a lot, but not when you consider this: they also represent 54 per cent of the population, which means that on a per capita basis, carbon emissions are lower in cities than elsewhere. On average, a person living in a city emits 4 tonnes of carbon a year, against more than six in the rest of the country. This is in part because industrial activity tends to locate outside cities (in blue on Figure 1). But in transport and housing, cities are greener, too.

Figure 1: Cities have a lower carbon footprint across all three sectors

2. This is because of the benefits brought about by density

And this is what most of the conversation should be about in Glasgow today.

The reason why transport emissions are lower in cities is because of the way our immediate built environment influences our daily lifestyles, from how we commute to work to how far we need to go to find a supermarket. And density, a defining feature of cities, makes low-carbon transport options more accessible: journeys are shorter and can more easily be walked or cycled. Public transport is more viable too, because of higher demand. This also applies between cities: for instance, Telford and Oxford have very similar population size, but Telford’s built up area is much larger, resulting in higher car usage and transport emissions per head. As shown on Figure 2, this relationship between density and transport emissions can be seen across UK cities. 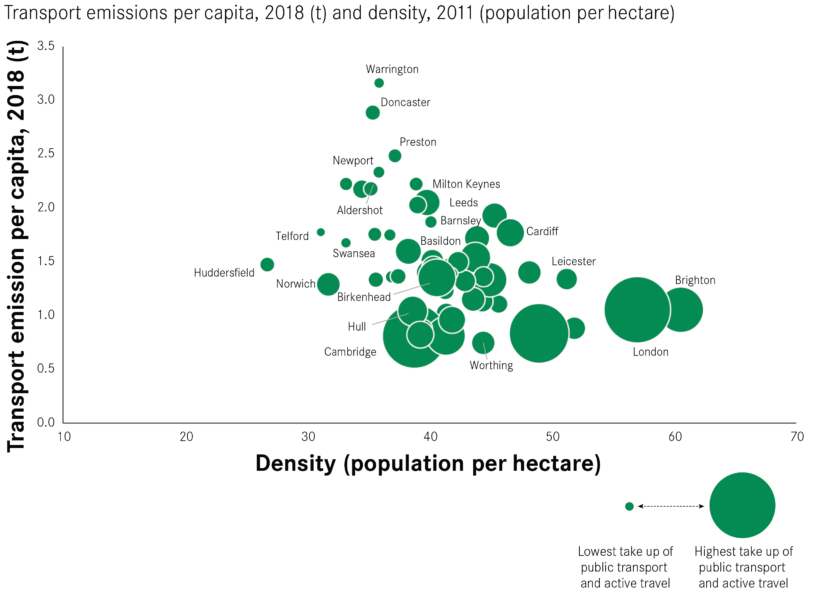 Source: BEIS, 2020. Census 2011. Centre for Cities’ own calculations. The bubble size here refers to the take up of public transport and active travel.

It also applies to housing: denser housing, like flats or terraced housing, are more energy efficient than typical out-of-town single-family housing, resulting in lower carbon footprints: about four tonnes of carbon per dwelling for the former, against more than eight in the latter.

What this means is that if we are to make COP26 a success and meet commitments in terms of cleaner transport and cleaner buildings, then we need to change the way cities are planned, built and managed. More housing needs to be built within existing built-up areas, near public transport network (as opposed to building in the outskirts in isolated developments). Without this, interventions which aim at getting more people on a bus or cut domestic emissions will have much less impact.

This does not mean it will be the only lever to pull: alongside greater density, other things will need to be done, such as retrofitting homes, ditching fossil fuels switching to renewables, and phasing out petrol and diesel cars.

3. Mayors and local leaders can make a difference

To date, in the UK, more than 300 local authorities have declared a climate emergency. But for it to be something more than virtue signalling, they now need to pull the levers they have at their disposal. Planning policy is one of them: local planning authorities can align spatial planning principles with environmental objectives by influencing the location and type of new developments in their local areas, and cut carbon emissions as a result. This, alongside powers on transport (facilitating active travel and public transport, building more cycle lanes or restricting parking space) and housing (retrofitting the buildings they own and ensuring better regulation standards) can make a huge difference. And it would bring many local benefits, such as cleaner air or lower energy bills for the poorest households.

Some places have already taken tough political decisions to improve the impact of their place on the environment, for example Birmingham’s ‘supersized low-traffic neighbourhood’ and Clean Air Zone, London’s recently extended ULEZ, or Nottingham’s Workplace Parking Levy. Other places should follow suit if they want to turn their climate emergency pledges into action (and clean up the air their residents breathe).

Our work on net zero

Our net zero work sets out what needs to change if urban areas are to lead the way in decarbonising the UK’s economy, without leaving people and places behind.

Air quality
Net zero: what is the carbon footprint of my city?

Explore the carbon footprint of your city or town to see how sectors contribute to total carbon emissions and how it compares to other places.

How our spatial footprint dictates our carbon footprint: the denser the greener