Unlike cities in the USA, there appears to be no link between city size and productivity in the UK. That was one of the findings of the OECD’s Metropolitan Century, which Andrew recently blogged on. So does this mean that scale doesn’t matter for UK cities?

In theory, cities become more productive as they get larger because of the forces of agglomeration. Access to a larger number of workers, suppliers, clients and collaborators makes knowledge-based businesses more efficient than if they were based in a smaller city. And this in turn increases the productivity of the city overall. But as the OECD work shows, while this plays out in London – the UK’s second most productive city – it doesn’t appear to do so in other big cities.

But looking at the static picture alone may not be telling us the full story. To get a better understanding of what’s going on we have to look at the trajectories that London, Manchester and Birmingham – our three biggest cities – have been on.

As shown in the chart below, and in our recent blog post, London hasn’t always been successful. Between 1951 and 1991 it lost 820,000 net jobs as it grappled with the changing structure of its economy. But the more recent performance of the capital shows that it has clearly passed through a turning point. London has boomed since 1991 – it had 1.6 million more jobs in 2013 – and the effects of agglomeration are very evident today. 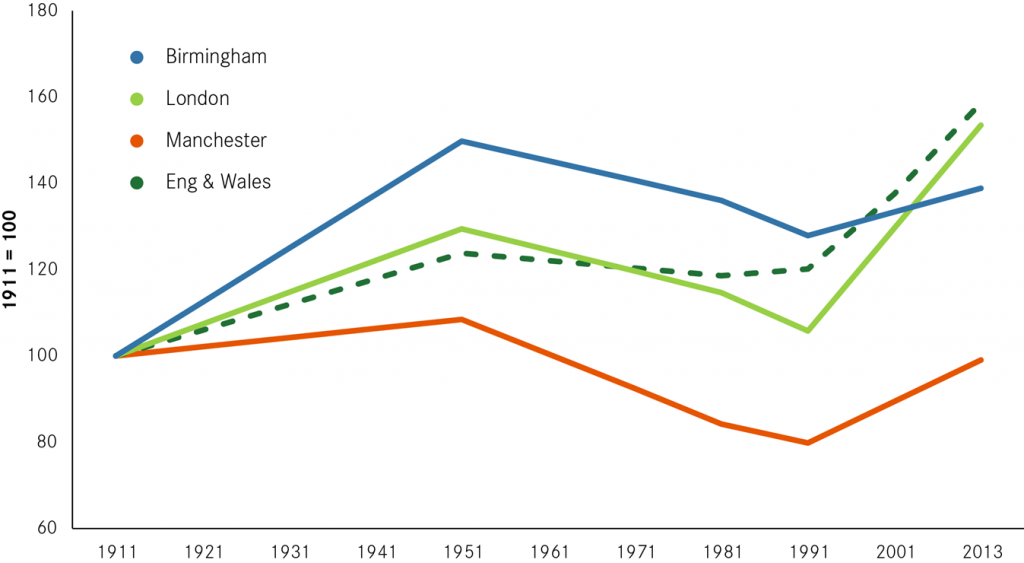 Manchester has also passed through a turning point. Between 1951 and 1991, it lost 270,000 jobs – a quarter of its total number. But since 1991 it has seen net jobs growth of 24 per cent (a net increase of around 180,000), driven by knowledge-intensive business services (KIBS). As in London, this growth has been driven by Manchester’s city centre.

Birmingham’s turning point is less clear to spot. It boomed in the interwar period, far outstripping growth in both London and Manchester. But it has struggled since. Between 1951 and 1991 it lost around 160,000 jobs (a fall of 15 per cent). And while it has seen overall jobs growth since 1991, this has been propped up by the public sector – the city had over 15,000 fewer private sector jobs in 2013 than two decades earlier. But a walk through Birmingham’s city centre, with its towering glass offices and bustle on its streets, suggests that a turning point has been reached. While the wider city has continued to lose private sector jobs as it grapples with deindustrialisation, its city centre has created them by the thousands. And this has been driven by jobs growth in KIBS.

Unlike London, the problem in Birmingham and in Manchester is that they haven’t been able to generate enough jobs in new knowledge-based industries to date to offset the losses seen in more traditional ones. But the industrial make-up and growth of their city centres in particular suggest that agglomeration effects are very much playing out in the two cities, it’s just that their outcomes are masked by very large industrial hangovers.

Our big cities are on the rise. But the size of their industrial hangovers, and the different speeds at which they are dealing with them, mean that this rise isn’t obvious. So while there may be no relationship between city size and productivity in the UK today, this might look very different in years to come.

Previous blog in the series: KIBS and candy floss: economic change in coastal towns since 1911