Wednesday, we received news that UK GDP contracted by 0.7 percent. David Cameron has said that more needs to be done. I agree – and much of that should be done in cities to respond to the local economic conditions.  However, despite the rhetoric around the localism agenda, central government still retains its firm grip on the purse strings. Shrinking budgets and limited flexibility leave local authorities with much to do but few resources to do it.

The Centre for Cities’ latest report, Banking on Growth, highlights a key challenge to supporting growth: how will local government pay for capital projects that can unlock economic growth during this age of austerity and with limited financial powers.

Capital projects managed by councils include roads, schools, housing, and waste infrastructure—the very things that help our cities run effectively. About 80 percent of local government’s capital spending is in these areas, putting them in charge of investments that can support economic growth.

But, the spending cuts and recession have brought significant budget challenges to many councils across England. Councils’ revenues are declining year-on-year due to lower capital receipts and shrinking government funding, but capital spending cannot fall as quickly due to the long-term nature of capital finance commitments.

The gap between how much central government gives to local authorities for capital projects and how much authorities spend has more than doubled since 2006/07 from £4 billion to £9.3 billion. This makes paying off existing loans an increasing challenge for authorities before they even think about borrowing for new capital projects. 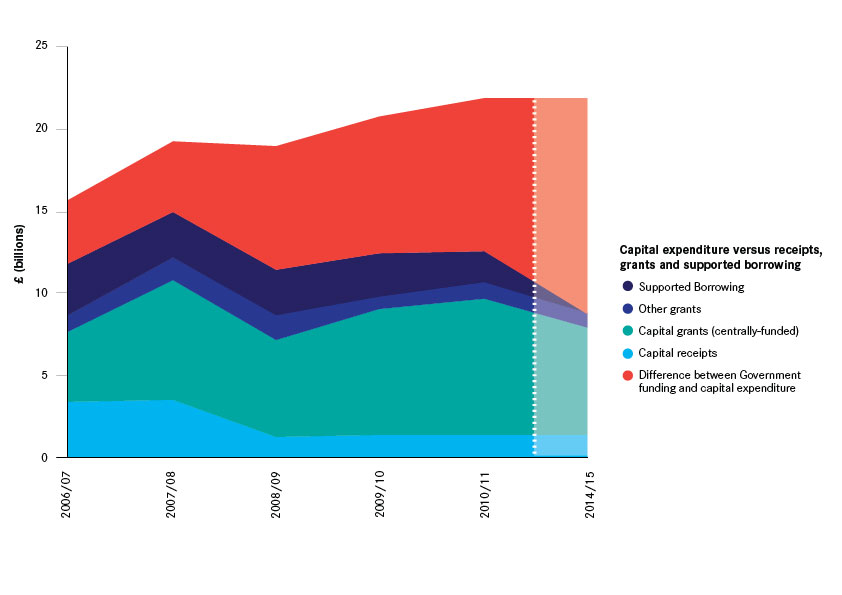 New borrowing by local government has fallen since the recession. Public Works Loan Board advances dropped by more than half from 2007/08 to 2010/11. So, local authorities are having to be especially prudent given their lack of control over funding, and this will have an effect on their ability and appetite to invest in future projects that will create jobs and contribute to the economic recovery.

So what needs to change?  While there are limits to devolving funding in the short term, our work highlights two things that need to be done now:

Our work, as always, is ongoing.  Next we’ll be looking at the advantages, pitfalls and barriers to the range of financing mechanisms local government can use to support economic growth.