So what is a globally competitive city?

Defining a globally competitive city is not straightforward

Several composite indicators already rank cities internationally, but the Centre for Cities has created a new definition that aims to capture the spirit of the Levelling Up White Paper. In the coming months, we will expand on this research to look more in detail at what it means for cities to be “globally competitive”.

A globally competitive city needs to be productive and large

The Centre for Cities sees high productivity levels – one of the metrics identified in the Levelling Up White Paper – as an outcome of being a globally competitive city. In a globalised world, a city’s productivity level tends to reflect its ability to attract and foster both talent and innovative businesses, especially at the international level, and this is what drives economic growth.

We expect any globally competitive city to have productivity levels (i.e. output per worker) above 95,000 USD (constant prices, constant PPP, base year 2015). A city meeting this criteria would be within the top third of the cities under analysis.

However, productivity alone is not enough to define a globally competitive city. These cities should be expected to make a significant contribution to the national and regional economy, which requires them to be relatively large in size. For example, Cambridge is highly innovative and productive but only accounts for 0.3 per cent of the UK’s total economy. Even if Cambridge’s economy were to double in size, its impact on the national economy would still be relatively marginal. On the other hand, if Birmingham (which has an economy ten times larger than Cambridge) was a globally competitive city, we would expect it to substantially improve the West Midlands economy as a whole.

Moreover, in order to compete globally in several sectors, cities need to offer the benefits that businesses and talent look for, such as transport infrastructure, deep labour markets, and amenities. These benefits are more likely to exist in large cities. Cities like Ingolstadt (which has around 130,000 residents) and Milton Keynes (approximately 270,000 residents) are highly productive, but they don’t have all the necessary features to be absorbing thousands of new businesses and residents – and therefore drive national growth – in a short period of time.

To compare different urban areas across the developed world, we have used the OECD’s metropolitan areas data to measure both productivity and size. Productivity data is available up to 2018 for most regions, but this exercise opts to analyse 2016 data in order to include cities in Japan.

A globally competitive city needs to meet the following criteria:

Against this criteria, there are 74 global competitive cities in the OECD dataset (13 per cent of all cities, see Table 1), including 26 in the US and 33 in Europe (excluding the UK), and only one (London) in the UK. 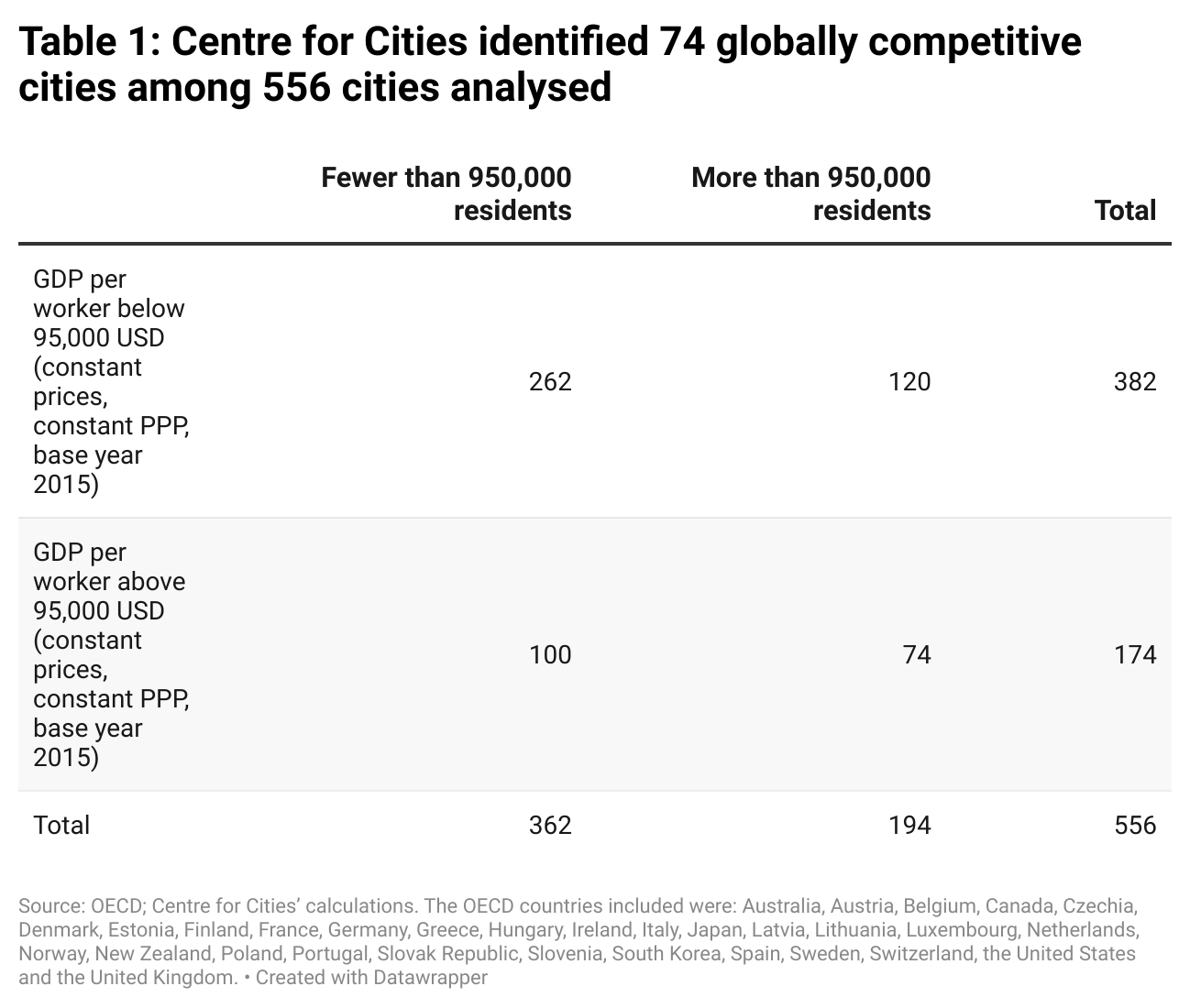 Table 2 suggests that the Government is right when it recognises that the UK lacks globally competitive cities. Based on Centre for Cities’ criteria, London is the only globally competitive city in the UK, with the remaining large cities 12-25 per cent below the productivity threshold. The country performs in line with some smaller countries in Western Europe such as Austria, Finland and Denmark, and underperforms the Netherlands, Sweden, Belgium and Spain. 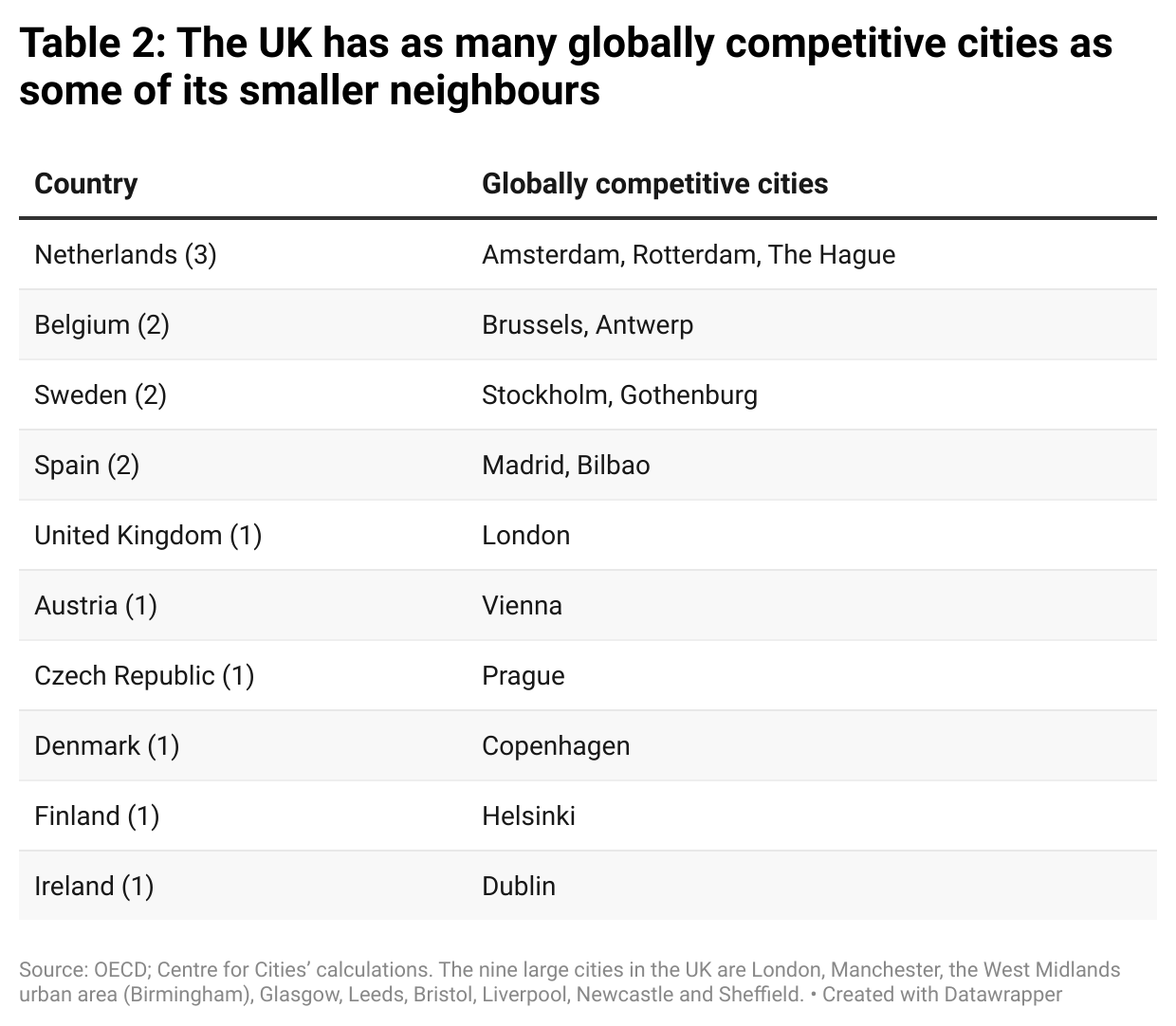 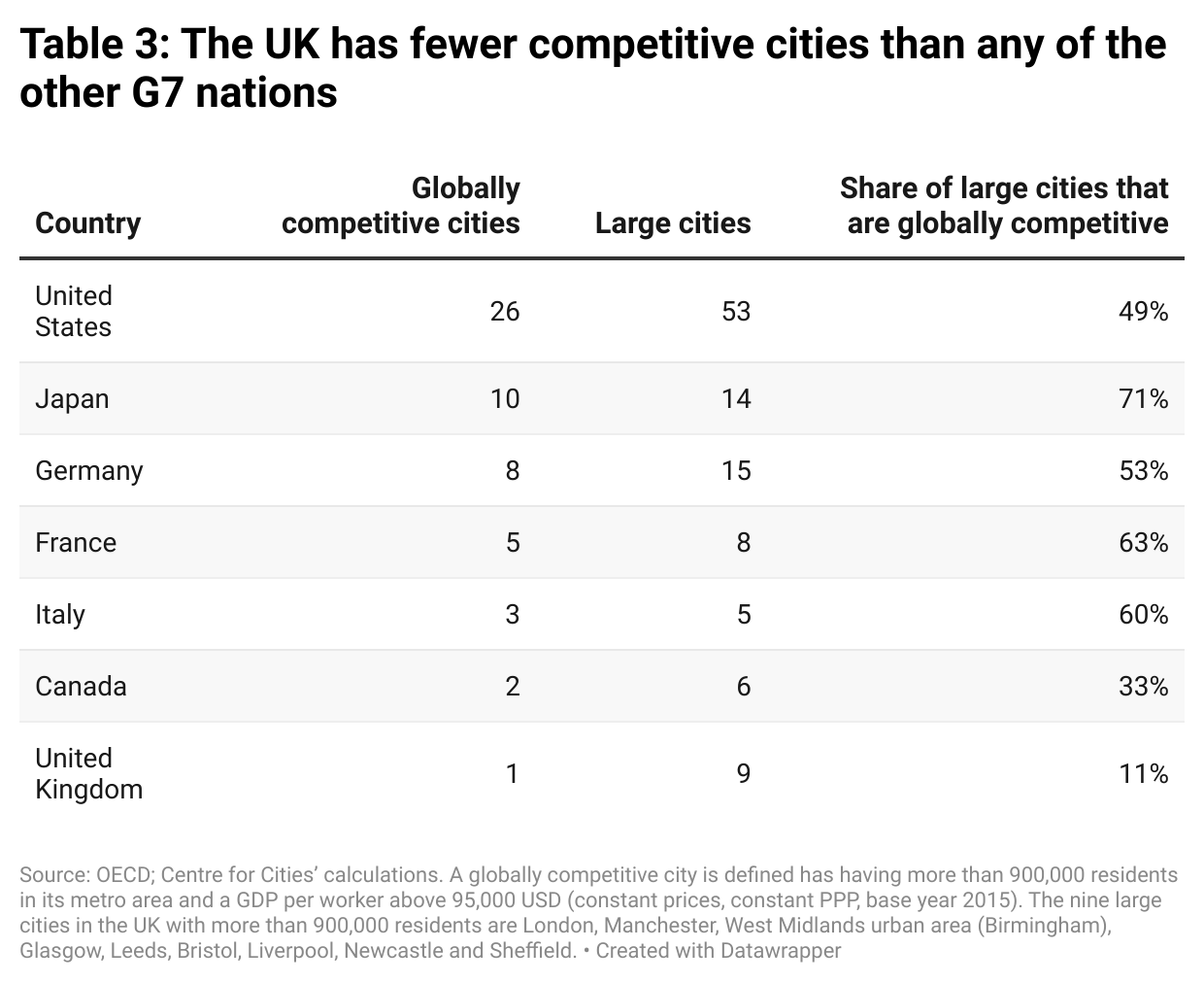 Consequently, the Government needs to recognise the trade-offs within its Levelling Up missions. It should identify and prioritise the cities with the highest likelihood of becoming globally competitive. Centre for Cities research shows that the three largest cities outside of London – Birmingham, Manchester and Glasgow – are the ones with the highest productivity potential.

The White Paper implicitly recognises this, as it has proposed piloting three new innovation accelerators (worth a total of £100 million) in these three city regions. However, what the paper does not make clear is whether this prioritisation is agreed across government.

The Levelling Up White Paper rightly identifies the importance of improving the economies of the UK’s largest cities outside the Greater South East as the way to achieve its mantra of “Stay local, go far”. Whether these cities become globally competitive in the decades ahead will be an important test not just for their local leaders, but for central government too.

Devolution Levelling up Productivity
How will we know when we have levelled up?

Levelling up should have three key metrics

Levelling up Productivity
Does the Levelling Up White Paper measure up?

Yesterday’s white paper is good in its intentions, but falls down on its longer-term vision and funding to support this

City Minutes: Will the Government’s plan level up the UK?