A common argument in favour of high-speed rail in the North and Midlands is the integration of several cities into a single labour market. Comparisons between intercity rail (Northern Powerhouse Rail) and London’s tube projects (Crossrail, which will open this month) are often made to justify such investments. Meanwhile the Integrated Rail Plan (IRP), published this year, states that better connecting Liverpool, West Yorkshire and Greater Manchester as the three largest economic areas in the North will unify labour markets and “create the newest job and business opportunities”.

However, the composition of most British cities – both their economic strengths and their urban form – suggests that high-speed rail is unlikely to deeply integrate the labour markets between the largest cities in the North and Midlands.

People only commute long distances if it is worth it

According to Eurostat, around 13 per cent of British workers spend more than 60 minutes travelling to work and, on average, Londoners have the longest commutes. This is not simply explained by London’s existing transport network: it is the result of people balancing a number of pull and push factors, with high wages and larger, cheaper homes being offset against the time and monetary costs of the commute.

No such differential exists between Leeds and Manchester. Wages and housing costs are relatively similar between the two cities (Figure 1), which make frequent commutes between them unlikely, even if rail journeys became significantly faster. Moreover, earnings in these cities tend to be comparatively low (28 per cent lower than London), which makes the costs associated with commuting – mainly time and money spent – unlikely to be rewarded.

However, there is certainly commuter demand for transport links between Leeds and its immediate surrounding areas. Some 20 per cent of Leeds’s workers live in Bradford, Huddersfield or Wakefield and are willing to commute for the relatively higher wages of Leeds, while avoiding its higher house prices.

Figure 1: Thousands of workers in West Yorkshire opt to commute longer to have lower housing costs. This is unlikely to happen between Manchester and Leeds 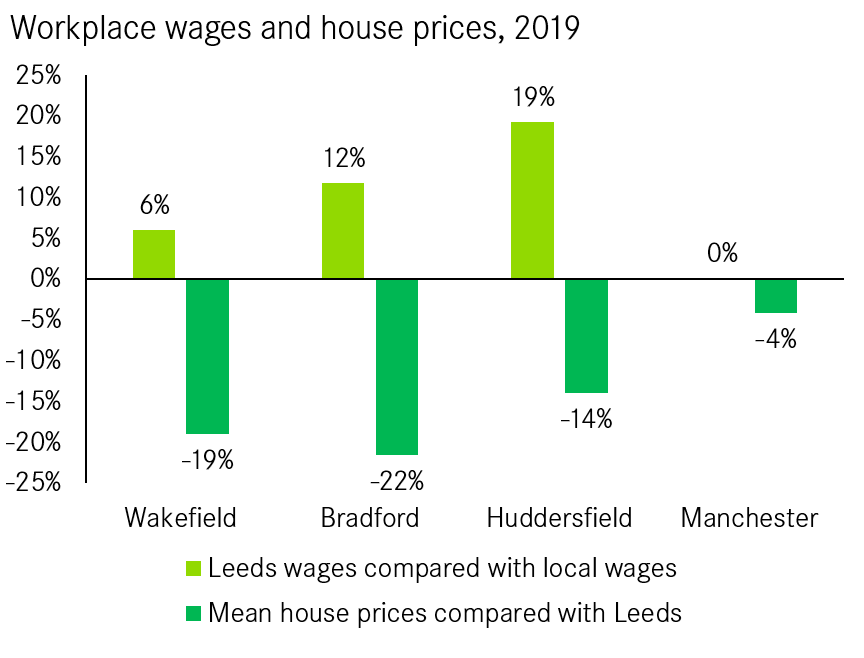 Politicians and policymakers seem to get caught up in the notion that if a train line is provided, people will use it. They should instead ask why people would use it, rather than simply assuming they will.

Even if there are potential benefits from intercity commuting between the largest cities in the North and Midlands, there is a relatively low number of residents who could benefit from it. Take Leeds and Manchester once again. The two cities combined have more than 3 million residents but only 3 per cent (approximately 95,000) of them live close to the train stations that connect both cities (Figure 2 for further details). This is a common feature across large British cities. 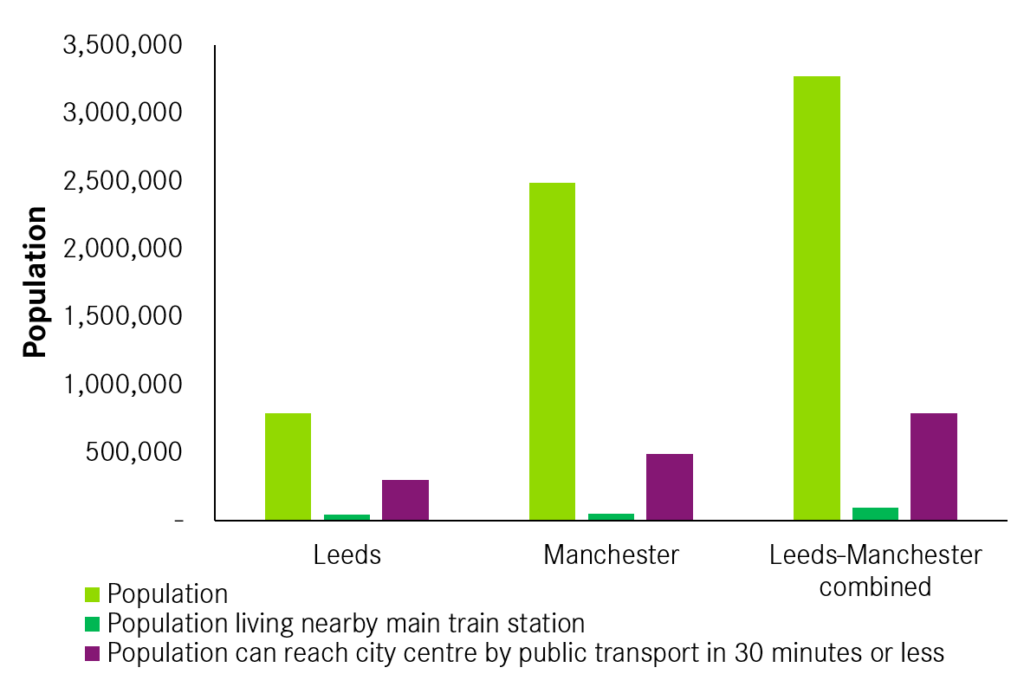 Only around a quarter of people living in Manchester or Leeds can reach their city centres in 30 minutes or less by public transport. ‘Potential commuters’ between Manchester and Leeds would still need to reach the train station before taking the 33-minute rail journey (IRP projections) – meaning many would end up having a commute two times longer than the national average.

The areas around the main train stations are not particularly dense

Poor access to quality public transport links in British cities is mostly driven by their urban form. The existing low-rise built form reduces the number of residents living near key train stations. Figure 3 shows that population densities around Leeds train station and Manchester Piccadilly are comparable to areas further away from the centre, despite improvements in the last years. This contrasts with Marseille and Milan where these areas are substantially denser than their surroundings.

Figure 3: Areas around main train stations are not particularly dense in Leeds and Manchester 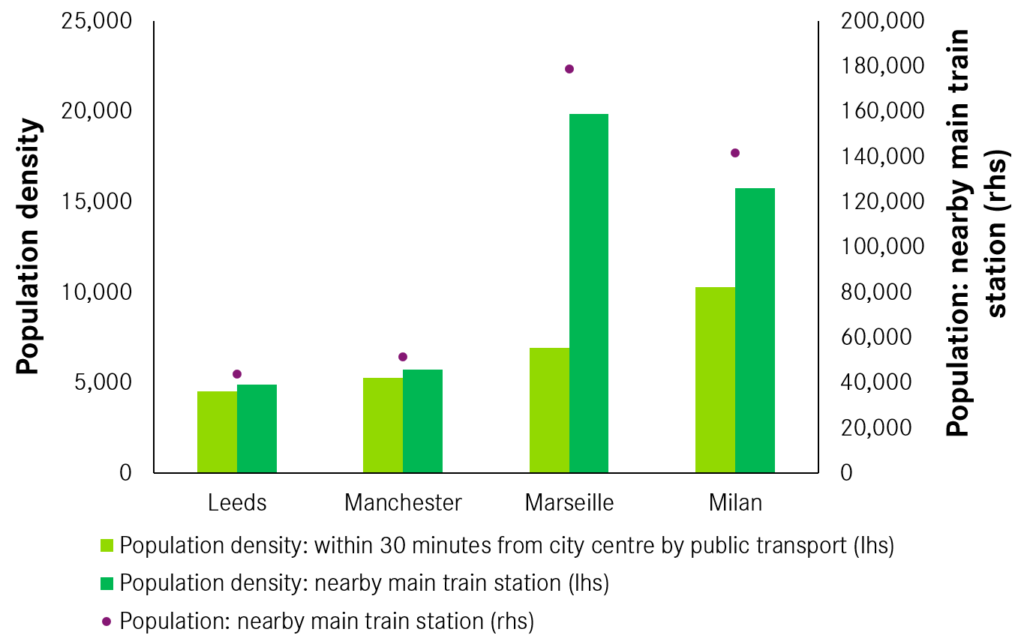 Milan and Marseille have 141,000 and 198,000 residents living within 9km2 of their main train stations, respectively; substantially more residents than Leeds (44,000) or Manchester (51,000). In order to make the most out of any future rail investments, policy makers should aim to have more residents living near public transport hubs. This will require reforming the planning system and bold policy choices at the local level, such as implementing Local Development Orders (LDOs) around rail stations.

If the goal of these investments is to increase the pool of workers who can commute into big cities, then they should focus on transport connections within them, rather than between them. This is exactly what Crossrail does for London.

The good news is that the Integrated Rail Plan partially points in this direction by stating that previous plans offered “too little on local services – less glamorous, perhaps, but more important to most people”.  But to work, and to help the Government achieve its aim to have a globally competitive city in each area of the UK, this must be coupled with building at much greater densities around the stations that such investment would create.