Is subsidised public transport a means to support the high streets? Last summer, Swansea City Council implemented free bus travel – from Friday to Monday, between 30 July to 30 August – as part of its £20 million recovery plan. The policy was re-introduced in November and December 2021. But what impacts did it have on footfall and spending in Swansea’s city centre?

Last summer during the period of free bus travel, ridership increased more than 50 per cent (around 220,000 more passengers), which is broadly in line with international experiences. That said, to assess the impact of the policy, comparisons need to be drawn between Swansea and a similar UK city. Plymouth is a good comparison in this instance. Before the intervention, Figure 1 suggests that footfall recovery in Swansea was performing in line with that of Plymouth. The labour markets of both cities have both shown several similarities over the course of the pandemic (April to July 2021), with the claimant rate moving in the same trajectory (see Figure 1).

Figure 1: Before free buses were introduced, both footfall and labour market indicators in Swansea and Plymouth were comparable. 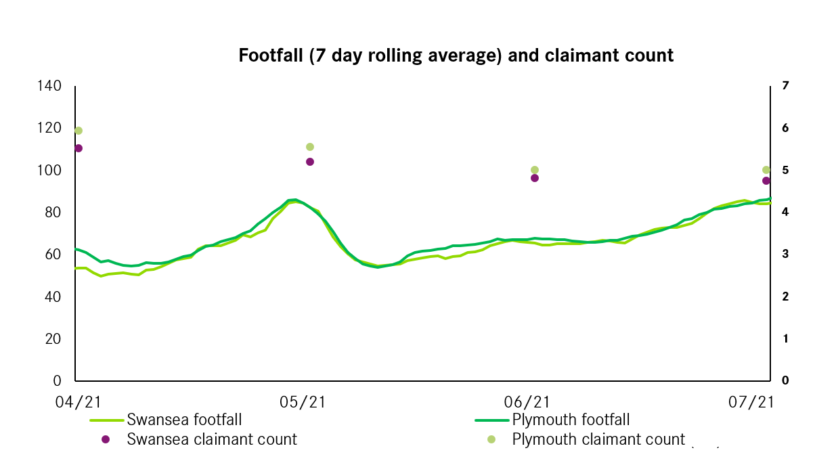 Things changed around August, the period in which Swansea City Council implemented its free bus transit policy. Figure 2 illustrates that city centre footfall in the two places started to diverge. And in the month following the intervention (September 2021), Swansea’s footfall fell. 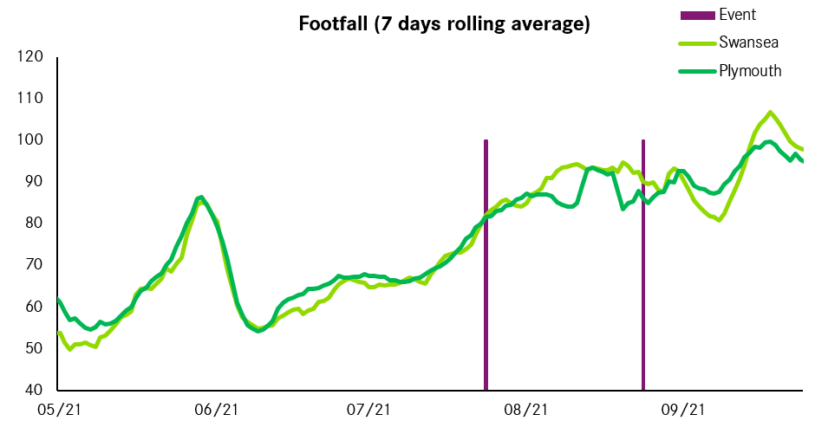 Such evidence alone is not enough to prove causality between free bus transit and rising footfall – these differences can be driven by other factors such as weather conditions or local events – but daily data shows some encouraging signs. Figure 3 shows that the increase in August’s footfall was mostly driven by the days during which the policy was active (Friday to Monday). Meanwhile, footfall between Tuesdays and Thursdays was fairly similar between both cities.

Figure 3: The difference between Swansea and Plymouth was mostly driven by the periods between Friday and Monday

But curiously data on spending doesn’t show any increase (see Figure 4). There are some possible explanations for this mismatch between footfall and spending: free buses may have increased footfall from residents with relatively little purchasing power (e.g. students); or city centre footfall is just a reflection of bus transfers from different parts of the city (e.g. residential suburbs to nearby beaches).

Figure 4: City centre spending in Swansea did not outperform Plymouth during the period free travel.

As recommended in Cities Outlook 2022, cities should be looking for ways to encourage people to return to the city centre, when it is safe to do so. The lesson from Swansea’s free bus policy is that free public transport travel may be a way to boost city centre footfall, but it also shows that the link between footfall and spend is not a straightforward one. Swansea’s experience should be taken into consideration for any other city considering such policies in the coming year.