Access to cheap borrowing has encouraged local authorities to proactively invest in commercial property. These assets can be a valuable tool for cities looking to improve the built environment they offer businesses and residents.

Councils are estimated to have spent £3.8 billion on property between 2013 and 2017, funded through the Government’s Public Works Loan Board (PWLB) at very low interest rates. Offices accounted for half of this investment, and roughly a third (£1.2 billion) has been spent on retail properties. And local authorities were the biggest investor group for UK shopping centres in the first quarter of 2018.

Why are cities investing?

There are two major motivations behind these investments.

First, at a time when cuts are squeezing council revenue budgets, property investments can provide a long-term revenue stream to keep quality public services up and running. Second, ownership of buildings in areas marked for redevelopment allows councils to assemble land more easily and gives them more influence over the changes taking place, allowing them to make sure the space evolves to meet their objectives.

But how exactly can cities turn property ownership into successful place-making? How should they adapt the buildings they invest in to improve the performance of the economies?

When developing the city’s property offer, the aim should be to get jobs back into the city centre while reducing the dominance of retail space. For councils who have invested in existing retail space and shopping centres, in particular, the temptation may be to try and retain their existing use, with new retail strategies designed to reduce vacancies.

But as our Building Blocks report illustrates, the evidence points to this being a dead-end. Instead, cities may need to convert the properties they own so they house a more diverse group of businesses.

Many city centres already have a lot of retail, and this has not offered significant economic benefit. Almost half (43 per cent) of city centre space in the weakest city economies is taken up by shops, while retail only accounts for 18 per cent of space in strong city centre economies. And many of these shops lie empty: in weaker city centres vacancy rates of high-street services (retail, food and leisure) are on average 16 per cent, compared with 9 per cent in stronger city economies. In Newport, nearly a quarter of these premises are empty, as the map below shows. 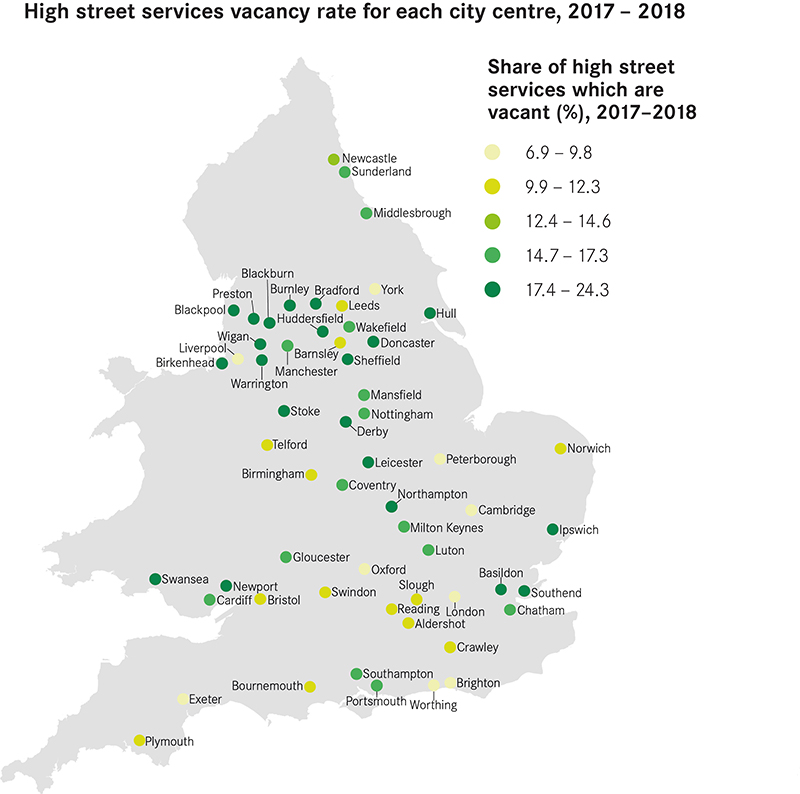 The big issue in these city centres is the lack of office jobs which are an important contributor to footfall for retailers. This means that in order to improve the fortunes of the high street, policy will need to tackle the barriers that deter those businesses from moving to their city centres.

Ownership of buildings gives cities the opportunity to reshape the type of commercial space on offer. Some of this will involve improving the existing office stock available, some will involve converting retail to office, and some of will require demolishing part of the space without replacing it, in the short term at least. Without ownership of the land and buildings on it, this task becomes very difficult to do but will be a fundamental part of turning the fortunes of a city centre around.

Cheap borrowing has provided a way not only for local authorities to generate an income stream through property investment but also opens up the opportunity to have greater control over the development of their city centres. For those choosing to invest, the focus must be on using ownership to make the city centre a more attractive place for all businesses to invest, rather than hoping to revive retail alone.

Want to receive updates on our research and analysis? Keen to be the first to hear about our upcoming events?  Sign-up for our fortnightly newsletter here.