This week is freshers’ week, and hundreds of thousands of students are starting their journey at university. For many, this will also mean moving away from home. As our report The Great British Brain Drain showed, students dominate migration patterns in the UK, with those who moved to go to university accounting for a fifth of all internal migration in 2014.

As a result, each year the movement of young people going to university cause a surge in the population of cities at the expense of non-urban areas, and particularly in large and medium-sized cities, with Sheffield, Leeds and Nottingham being the biggest student gainers. And this inflow of students brings benefits to the local economy, as students tend to spend their money where they study. Interestingly, London, in spite of its 49 higher education institutions, saw a large outflow of students to the rest of the country, though this did not represent a net loss of students thanks to the larger inflow of foreign students the capital attracted.

The ability of a place to attract students from other parts of the country will therefore affect the strength of its economy. But as the UK continues to specialise in more high-skilled, knowledge intensive activities, the extent to which cities can attract and retain skilled graduates will have a bigger impact on their economic performance. And when we look at the movement of graduates in UK cities, the patterns are significantly different to the movement of students.


For a start, London saw the largest net inflow of graduates, with a quarter of all graduates working in the capital six months after graduation. Its pull is even more pronounced for new Oxbridge graduates, over half of whom (52 per cent) moved to London after finishing university.

In contrast, medium-sized and large cities experienced a large outflow of graduates to non-urban areas and to London. And while many cities experienced a gain in graduates from other places, they still saw a net graduate loss when we consider the number of students who studied in those places but subsequently left after graduating.

This variation in patterns across the country poses a key question: why are some places better at attracting graduates than others? Our research suggests that cities that gained the most graduates did so because of their strong economies and the opportunities they can offer. For example, successful places like Basildon and Crawley attracted significant numbers of graduates despite not having a university campus. Indeed, our analysis shows that it is not graduate salaries which explain the differences in graduate gains in cities across the country, but instead the job opportunities and career progression that they can provide. And this applies in terms of both retaining graduates who studied locally, and attracting others from other places. Looking at the type of jobs, our data shows that graduate gains were generally larger in places where knowledge intensive businesses employment accounted for a larger share of all new graduate positions. 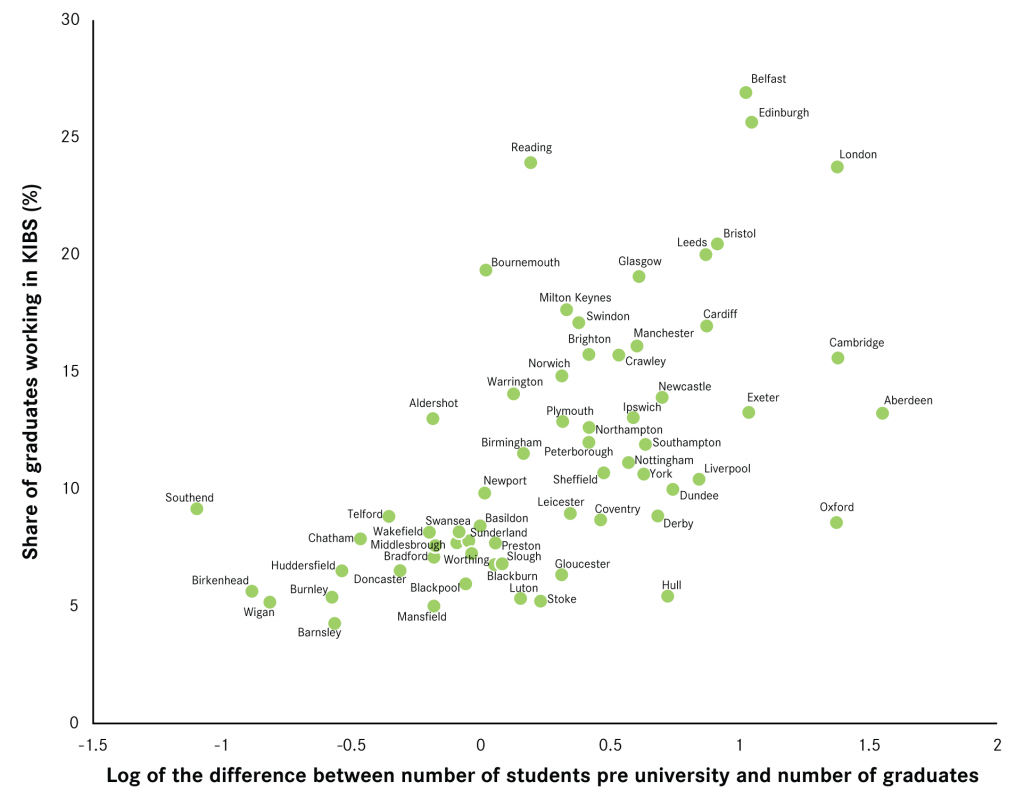 As such, if a city wants to attract and retain a greater number of graduates, then it needs to focus on wider economic growth and job creation policies that support the creation of more jobs, and particularly high-skilled knowledge jobs, rather than focus on policies that are specifically targeted at graduate attraction and retention. Ultimately, this comes down to strengthening the local economy, by investing in transport, housing and supporting high-knowledge businesses. This will help create high-knowledge jobs and make these places more attractive to both new graduates and other skilled workers.