Last week marked the half-way point in the two-year time limit for Brexit negotiations under Article 50. While there is now a transition deal in place to avoid a cliff-edge exit next year, there is still a great deal of uncertainty about what form Brexit will take and how it will impact different parts of the UK. The findings from the Centre for Cities and What Works Centre programme on Brexit highlight how variable the local impacts are likely to be. They also contain lessons for all local policymakers in terms of how to respond.

Take Sunderland and Milton Keynes. The size of the initial economic shock resulting from the increased costs of trade after Brexit is predicted to be larger in Milton Keynes, as the city specialises in financial and business services likely to be affected by a rise in non-tariff barriers, such as domestic law and regulation.

But, of the two, Milton Keynes is likely to be more resilient in the face of the economic shocks caused by Brexit in the longer term. The city’s economy is more diverse than Sunderland’s, and its sectors, including the financial and business services sectors, set to be hard hit initially, tend to be high value and high skill. Because of that, businesses and workers in the city are likely to find it easier to adapt and access new opportunities as a result.

Sunderland, by contrast, has a smaller, less knowledge-intensive service sector and is more dependent on the public sector. Employment in the city continues to be dominated by a few large firms, many of them foreign-owned. And it has among the highest unemployment and youth unemployment rates of any city. Negative impacts are likely to be much harder to deal with given the circumstances.

Differences between the two economies are reflected in their recovery from the 2008 financial crisis, which offers an insight into how they might respond to any Brexit-related shocks. Both saw a dip in economic output around 2008/09, with Milton Keynes being hit slightly harder. But they’ve followed very different paths since. Milton Keynes’ economy grew by over 50% between 2009 and 2016, while Sunderland has seen among the slowest growth of all UK cities at around 16%.

Economic output in Sunderland and Milton Keynes, 1998 to 2016 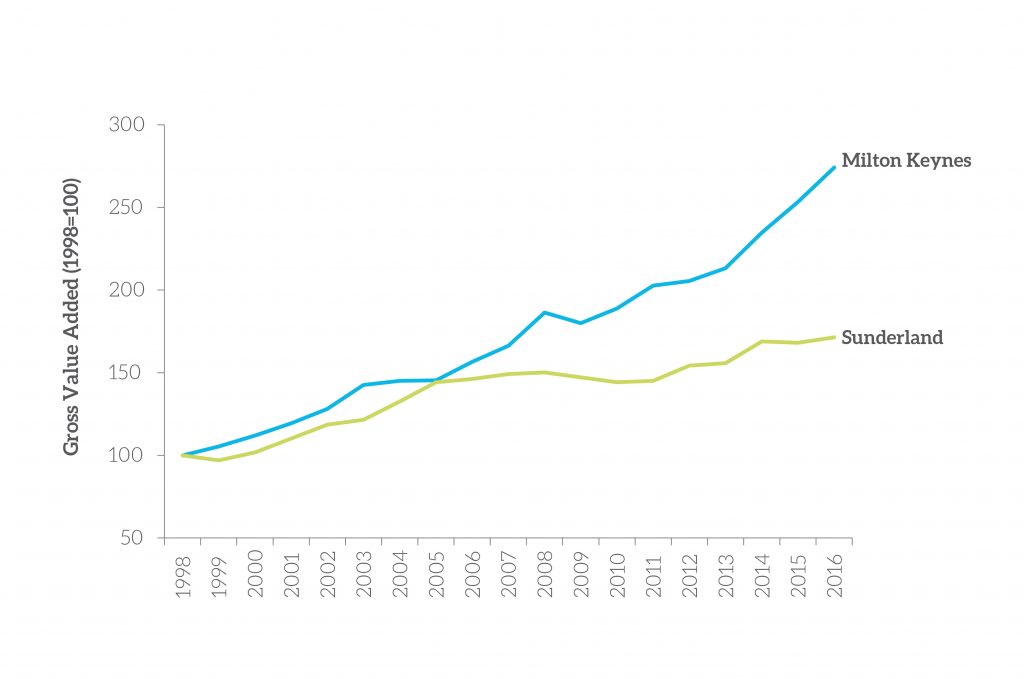 The work that The What Works Centre did with local partners across the country last year highlighted how variable the impacts of Brexit are likely to be from place to place. As discussed, the initial shocks are likely to vary, and so are places’ ability to respond to them. Beyond the impact on trade, differences in the profile of FDI and migration also mean that things are likely to play out very differently across the UK. Each city and local area needs to look at its connections with the EU, consider where the risks are and monitor changes as they develop through a combination of data and discussion with businesses.

Places also need to think about how to structure their response, bearing in mind both the potential impacts and the evidence regarding what works. For example, skills policy will play a crucial role, helping people to retrain and businesses to access the skills they need, and the evidence shows that local partners will need to work closely with employers to design and deliver effective interventions.

The What Works Centre’s latest report presents the evidence across a suite of policy responses, including skills, business and export support, drawn from policy reviews and toolkits for places to take into consideration.

Most importantly though, as local areas experiment with new policy interventions or the redesign of existing ones in responding to Brexit, they will need to evaluate the impacts of their efforts in order to focus on the most effective ways of mitigating the risks associated with leaving the EU, dealing with the consequences and making the most of opportunities that come their way.