It is an exciting time for urban mobility in Greater Manchester.

This April, the city’s Metrolink system turns 30 years old. Its increasing success, alongside the government’s recent investment of more than £1bn to improve the city-region’s urban mobility and the recent positive outcome of the judicial review that cleared the way for the bus system to be brought back under public control, means the shift towards a London-style transport system in Greater Manchester is well underway.

Building on the positive contribution of Metrolink, especially in the last decade, the next big challenge for Greater Manchester is to reverse the decline in bus ridership.  This is why the recent judicial decision is so important.  However, as important as bus franchising is (and there are funding challenges that will need to be addressed to ensure it is effective), it will also need complementary investments to shape the way people live and work, in a way that better supports the public transport system.

Over the last three decades, Manchester’s Metrolink has had an increasingly important role in the city-region’s public transport network. Since its creation in 1992, Metrolink has grown to become Britain’s most extensive light-rail system. Ridership grew alongside it, especially in the last decade, from 19.6 million journeys in 2009/10 to 44.3 million journeys in 2019/20 as Figure 1 shows. 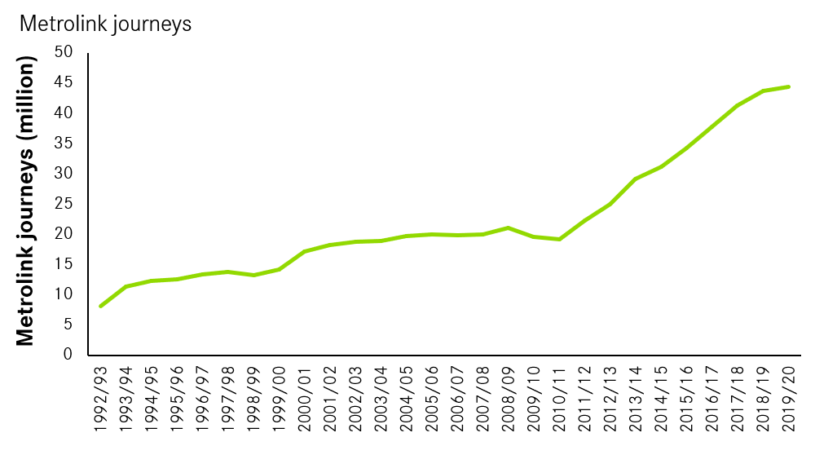 The observed increase in ridership took place alongside a significant expansion of the existing network. Metrolink opened with 30.9 km of track and by 2013, its length had risen to 69 km. After its most recent expansion to Trafford Park in 2020, the network includes 103 km of track and 99 stops.

Unlike Metrolink, the bus system was facing a decline in ridership before the pandemic

Despite the significantly positive contribution of Metrolink – especially over the last decade – a declining bus ridership in Greater Manchester has been a major challenge towards achieving a ‘London-style’ mass transit system. This is especially challenging because, as is the case across Britain, buses are a more common mode of public transport in Greater Manchester. In 2019/20, buses carried four times as many passengers as the Metrolink did. However, its ridership has been falling steadily over the past decade, and growth in Metrolink use has been unable to offset the decline in usage.

In the decade before the pandemic, bus ridership fell by 42.9 million journeys a year, while Metrolink rose only by 24.7 million. Figure 2 shows that combined ridership of these modes has been declining since 2013/14.

Figure 2: Public transport usage has been falling since 2013/14 and this has been driven by bus ridership 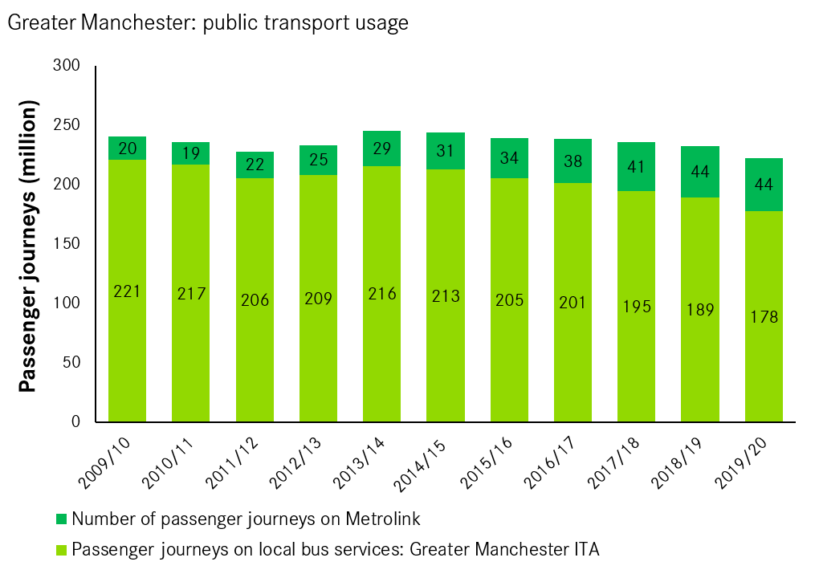 Bus ridership has declined across most British metropolitan areas. This suggests that the trend observed in Greater Manchester is not simply driven by a shift from buses to the new light rail routes. There are structural factors – the result of bus service deregulation in 1986 – that have contributed to the decline of bus ridership in Greater Manchester. In order to achieve a public transport system comparable to London, this trend needs to be reverted.

Improving the current bus system is necessary to improving Greater Manchester’s wider urban mobility. The deregulation of buses over thirty years ago led to different operators competing with one another on the most profitable routes, which in turn made fully integrated public transport harder to provide. Less profitable yet still important routes were underserved, reducing public transport connectivity across the entire network.

Bus franchising is a big step in the right direction. Transport for Greater Manchester will be able to strategically organise routes, timetables and frequencies and use more profitable services to subsidise others, guaranteeing services to low-demand areas that in turn sustain demand for the network as a whole. Franchising will also enable a unified ticketing system across different modes of transport, making public transport more attractive.

Once bus franchising is fully operational, other tools should be considered to further improve the overall network

Bus franchising is expected to be implemented by 2024/25 but Greater Manchester should aim to keep improving its public transport system in the years after that. To make public transport better and bring it to levels seen in European cities or London, local government may face some tough choices to channel revenue and boost demand towards public transport.

There are some revenue-raising tools available to subsidise or expand public transport but Greater Manchester’s policymakers should focus on the ones that simultaneously reduce congestion, because they will indirectly improve public transport services.

Two of the best options available are workplace parking levies (WPL) or a congestion charge. However, Combined Authorities cannot automatically implement a WPL, Greater Manchester would have to ask for some legal changes. Centre for Cities’ estimates, based on commuting patterns and employment data, shows that Greater Manchester could raise between £140m and £1bn over five years with a WPL or a congestion charge, respectively, depending on the model chosen (see Figure 3 methodology for further details). Implementing these policies would be politically hard but its benefits would deeply change Greater Manchester’s public transport network: a congestion charge could raise as much as the recently confirmed City Region Sustainable Transport Settlements (£1bn over 5 years).

Methodology: Congestion charge estimates based on the number of jobs within M60 in 2020 and the share of private-car commuters in that area from the Census (2011). These estimates assume that 15 per cent of the drivers will stop commuting by car because of the congestion charge. Estimates based on 220-230 commuting days a year. * Workplace parking levy estimates vary depending on the Local Authorities included: the lower bound assume a WPL in Salford, Manchester and Trafford, while the upper bound assume a WPL in all local authorities. All WPL estimates assume a number of targeted cars around 10 per cent of all jobs in the area, in line with existing estimates for other cities.

Road congestion slows down buses, which reduces the quality of their services. Evidence from London  shows that the tools discussed above can simultaneously disincentivise car use and make bus journeys quicker.

Manchester has previously failed to implement a congestion charge (referendum in 2008). But that was before the mass expansion of Metrolink and the improvements that will come with bus franchising. That said, experiences from other cities suggest that having a good quality public transport networks in place, which can be achieved in the coming years through bus franchising, may change the political mood towards these policies.

The only two cities that have already implemented either a WPL (Nottingham) or congestion charging (London) already had comparatively good public transport networks before implementation. The revenues from these schemes have allowed for further improvements to public transport: the WPL has been used to expand the Nottingham’s tram network; while London’s congestion charge revenue is spent in the bus network.

While bus franchising and expanding the Metrolink are key ways of boosting transport connectivity, policy makers also need to think about Manchester’s urban form. The current layout – dominated by low-rise, terraced, and semi-detached housing – forces thousands of residents to live further away from good public transport connections. This contributes to further congestion and poor air quality, while also hindering Manchester’s economic performance by limiting access to employment and educational opportunities.

Recent research from Centre for Cities found that, even if Manchester continued to expand Metrolink to match the size of its Western European counterparts, accessibility would remain low due to its urban form. Therefore, to address Manchester’s public transport challenges, central and local government should also encourage densification efforts near existing or future public transport infrastructure.

In order to make the most of existing and new public transport infrastructure, local governments should use local development orders (LDOs) to allow redevelopment of land near existing public transport. A strategic review of the greenbelt could bring 400,000-500,000 new homes around existing train stations within 45 minutes of Manchester’s city centre.

Government should set a new institutional framework that simultaneously makes urban development around public transport easier. To do this it should first continue the planning reform process and shift away from the current discretionary system towards a rules-based flexible zoning system. Second, the next phase of devolution should give further fiscal powers to Metro Mayors, so they can capture the economic benefits of developing land with tools such as land value uplift.

Developing a ‘transport-oriented development’ approach on top of an integrated public transport system (achieved by Metrolink’s expansion and bus franchising) would provide Manchester with funds to reduce its dependency from central government, steadily grow its network and deliver ‘London-levels’ of connectivity across the city region in the decades ahead.

Devolution Future of cities Mayors
Bus franchising: what does it mean for Greater Manchester?

Greater Manchester will soon adopt a London-style bus franchising system so what are the expected consequences of the decision, and why should other cities follow?