With welfare spending constituting a third of the entire Government budget, and £100 billion spent on welfare payments for working age people alone, it is understandable the design of the UK’s benefits system is a key theme of an election campaign in which fiscal austerity continues to dominate parties’ policy platforms.

Throughout Britain, the annual welfare bill per capita varies widely from city to city (see map below). Unsurprisingly, cities with the strongest economies rely on welfare payments less than other cities. In Cambridge, the city with the lowest welfare bill, the bill amounts to just £2012 per person. In Blackpool it is twice as much at £4,020 per person. There is also a clear geographical pattern, with nine out of the 10 cities with the highest welfare bill per capita located in the North.

How does the welfare bill vary across cities 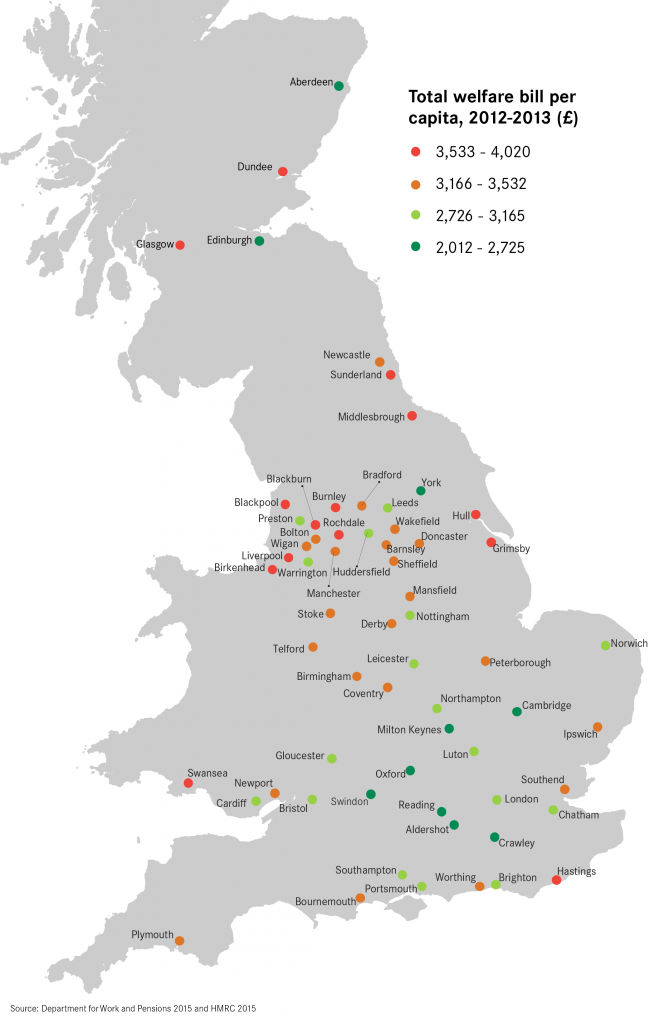 All of the major parties have stressed that they want to reduce the welfare bill through making the system simple, effective and most of all ‘fair’. With headlines about benefits tourism, or people having a ‘lifestyle’ of living on benefits, it is not surprising that the idea of ensuring that work pays is a key part of all parties’ proposals:

Aside from Labour’s benefits cap proposal, the problem with the majority of the welfare polices announced is that they don’t reflect the varying costs of living in different places, or the different levels of jobs and work experience opportunities places currently offer.

Due to variations in factors such as housing and childcare costs, a larger amount of money is needed to achieve a basic standard of living in some cities than in others. High basic living costs mean the introduction of the benefits cap has had a much larger impact in London than elsewhere – 45 per cent of households seeing their benefits reduced are in the capital. And of the top 20 local authorities with the highest number of households affected, only one (Birmingham) is outside London. This is why it is so important to ensure that welfare policies take into account the diversity of core living expenses in different cities throughout the UK, or we risk pricing some of the most vulnerable people out of their communities.

But even Labour’s proposals do not seek to tackle the second key issue with assuming cuts in benefits will incentivise people to work – namely the limited job and training opportunities some areas have to offer. The fact remains that there are large economic disparities between cities, and some have fewer available jobs for their residents, or a skills mismatch between residents and vacancies. The latest ONS figures show a significant number of people (16 per cent) working part-time because they cannot find full-time employment. The UKCES has shown that work experience opportunities vary geographically, with 46 per cent of companies in London offering placements but only 29 per cent in The Humber. As such, it is more challenging for residents to get a job or training in some cities than others, and reducing benefits may just reduce standards of living for those unable to do so.

Benefits play an important role in ensuring those who are out of work have a reasonable baseline standard of living as they seek to find new employment. Merely reducing welfare support is not enough to significantly reduce worklessness in some parts of the country. We also need to empower cities to respond to the specific challenges they face – through giving them greater powers to implement policies that provide people with the skills required by local employers, and creating attractive business environments that attract firms to areas that currently have limited jobs opportunities.