In the current debates over the significance Lord Heseltine’s `No Stone Unturned will have in Britain’s economic recovery, much of the focus has been on the size of the single local growth fund. Whilst important, this narrow view risks ignoring the other important 88 recommendations made in the report. Several of these recommendations deal with the role that universities can play in Britain’s economic recovery. The Centre’s previous research has looked into this issue on several occasions and our findings provide relevant lessons for policy makers today.

Innovation, science and the city concentrates on the Science City policy and explores the extent to which it was able to achieve its goal of using ‘universities to spur innovation and drive economic performance’. The Science City initiative was an example of a top-down initiative that lacked direction.  The initiative’s lack of support from central government meant that its impact varied tremendously from city to city. The most successful cities – Birmingham, Newcastle, and later Bristol – displayed a greater emphasis on partnerships with local businesses, which led to ‘major investments in research facilities’ and new partnerships – such as the Science City Research Alliance in Birmingham or SETsquared in Bristol.

While the lessons from the Science City policy suggest that it might be unrealistic for universities to drive a research-led economic renaissance in Britain’s cities, universities are influential when driving partnerships within the local economy. For example, Starter for Ten shows that ‘Spin-out’ firms –or firms set up to capitalise on innovations begun in a university- have a much higher turnover, than most other UK businesses. (See Below) Although these ‘Spin-out’ firms might be few in numbers, their presence and performance does indicate that close working partnerships between universities and local businesses can bear fruit. 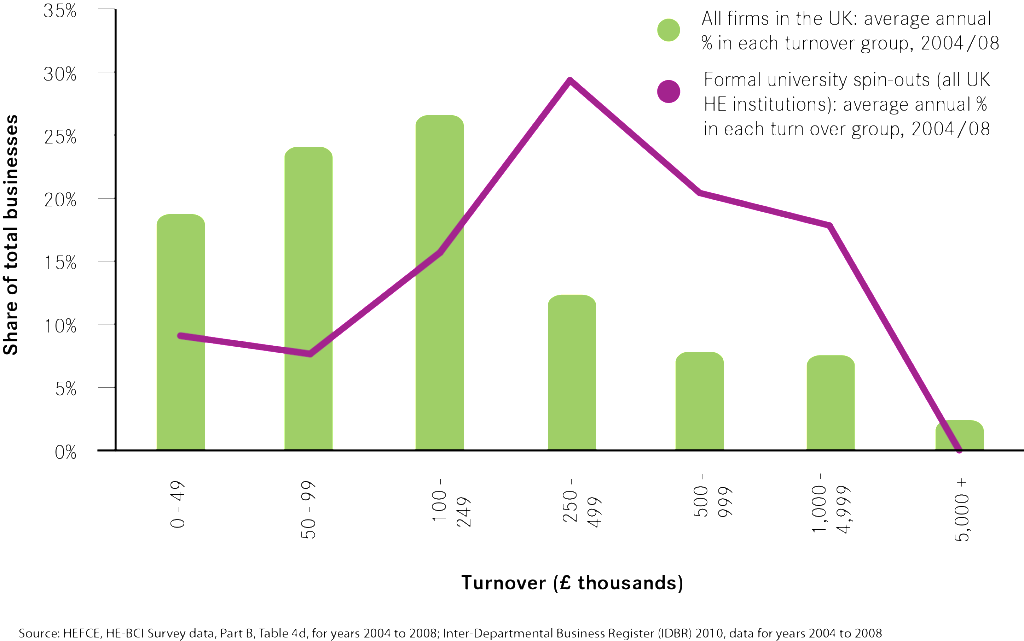 Starter for ten also identifies the need to improve another important role of universities – educating and linking students with employers. This sentiment is echoed in Lord Heseltine’s report where he calls for, “Higher education courses to be a close collaboration between employers and universities.” As the Destinations of Leavers from Higher Education Longitudinal Survey shows, in all but two regions of England (London and the North West), less than 50 per cent of first degree graduates stay in the same region as their university. If cities want to retain the students being educated in their cities and thereby improve their skills profiles and overcome skills shortages,they must build and strengthen linkages between universities and employers.

While the Centre’s two reports highlight the need to improve university-business partnerships, they also call on policy makers to recognise the limitations of university-led economic strategies. For example, university-led research as a means of fostering economic growth is unrealistic for the majority of Britain’s cities because of issues of scale. This phenomenon can be seen in the ‘golden triangle’ of research universities – London, Cambridge and Oxford – accounting for 45 per cent of total public sector research activity, compared with only 28 per cent for all Core Cities combined. While the impact of university research will be felt the most in smaller cities, in most cases university funding accounts for a very small proportion of the city economy. (See Below) Further, some universities benefit more from partnerships with local business. Public research institutions in Preston, Hull and Liverpool receive more than 40 per cent of their research income from local business partnerships, but, for most other cities, that figure is less than 10 per cent. 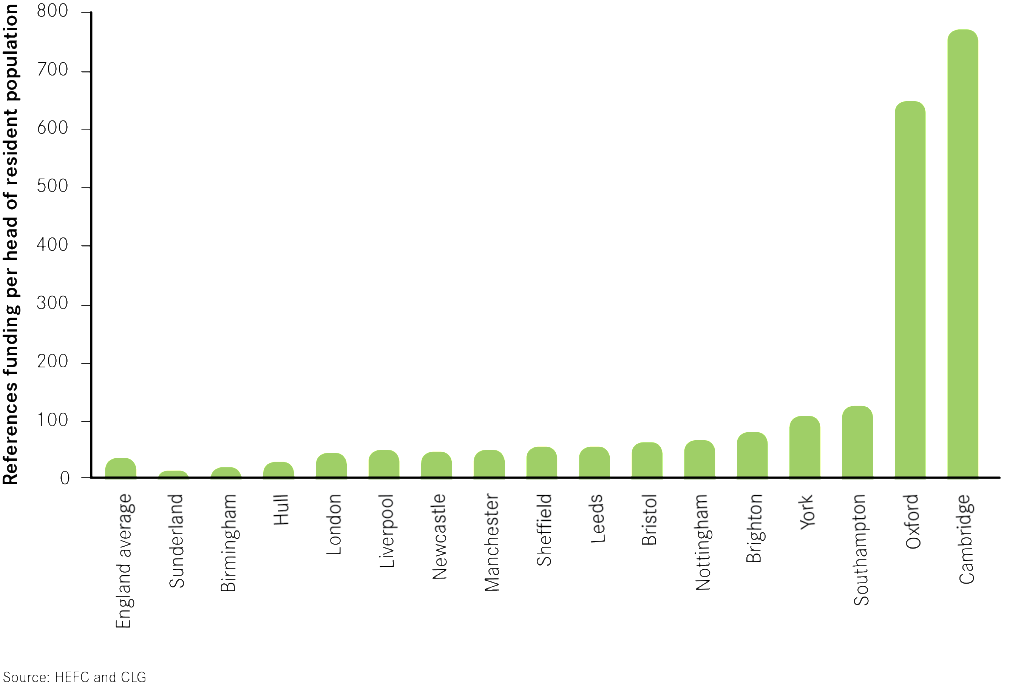 Starter for Ten also notes that the single biggest impact universities have on city economies is through the attraction and retention of students and employees of the university. For example, university students and faculty combined account for 20 per cent or more of the total population in cities such as Oxford, Coventry, Plymouth and Aberdeen. The report shows that universities can act as ‘anchor institutions’ which increases demand in the economy and has positive effects on consumer spending. This raises interesting questions for city policy makers about where to locate university facilities and student housing to maximize the consumption benefits for local businesses.

The Centre’s work on the role and impact of universities on city economies highlights several issues that need to be considered. First, that university research activity, whilst important, accounts for a very small proportion of overall economic activity in all but a few select British cities. Secondly, British universities influence their local economies primarily through the size of their student and faculty population. This research indicates that, when considering the role universities play in economic performance of cities, policy makers should focus on facilitating partnerships between students and employers, as well as between researchers and local businesses as well as maximizing a university’s economic impact on local businesses through location and careful urban planning.