Today’s news is dominated by the expected announcement of the Stronger Towns Fund and the apparent pork barrel politics of it. Whether that is the case or not, there are now decisions to be made about how this £1.6 billion should be spent.

There is much to be welcomed about this fund. As we’ve written elsewhere, the great irony of the Brexit vote is that the alarm call that it sounded that people in many parts of the country were not happy with the economic opportunity available to them has been completely ignored since the referendum. And so belatedly attempting to answer this alarm call is welcome (although it’s a common misconception that all towns voted to leave, something the Government appears to acknowledge with the skew in the funding to the North and Midlands).

The fund should have its main focus on skills.  More specifically, giving the whole £1.6 billion to the better provision and take-up of further education would be a real win. It’s amazing that politicians continue to call for the scrapping of university fees while saying nothing about the underfunding of further education.

But which form of education is someone with no or few formal qualifications living in a ‘left behind’ town most likely to use? The 51 per cent of people in Peterlee (near Sunderland) that haven’t even got five passes at GCSE, or the 55 per cent in Clacton-on-Sea (in Essex) are unlikely to benefit from the scrapping of fees.

That won’t happen of course. Instead at least a portion of the money will go on attempting to boost jobs and productivity in these areas, as the minister repeated a number of times in his radio appearance this morning. And this is where the fund will likely run into trouble.

The desire to promise jobs and wage increases in towns is completely understandable. But it is much more difficult to deliver. Our Talk of the Town report gives two insights on this, which are drawn from the chart of town performance below. 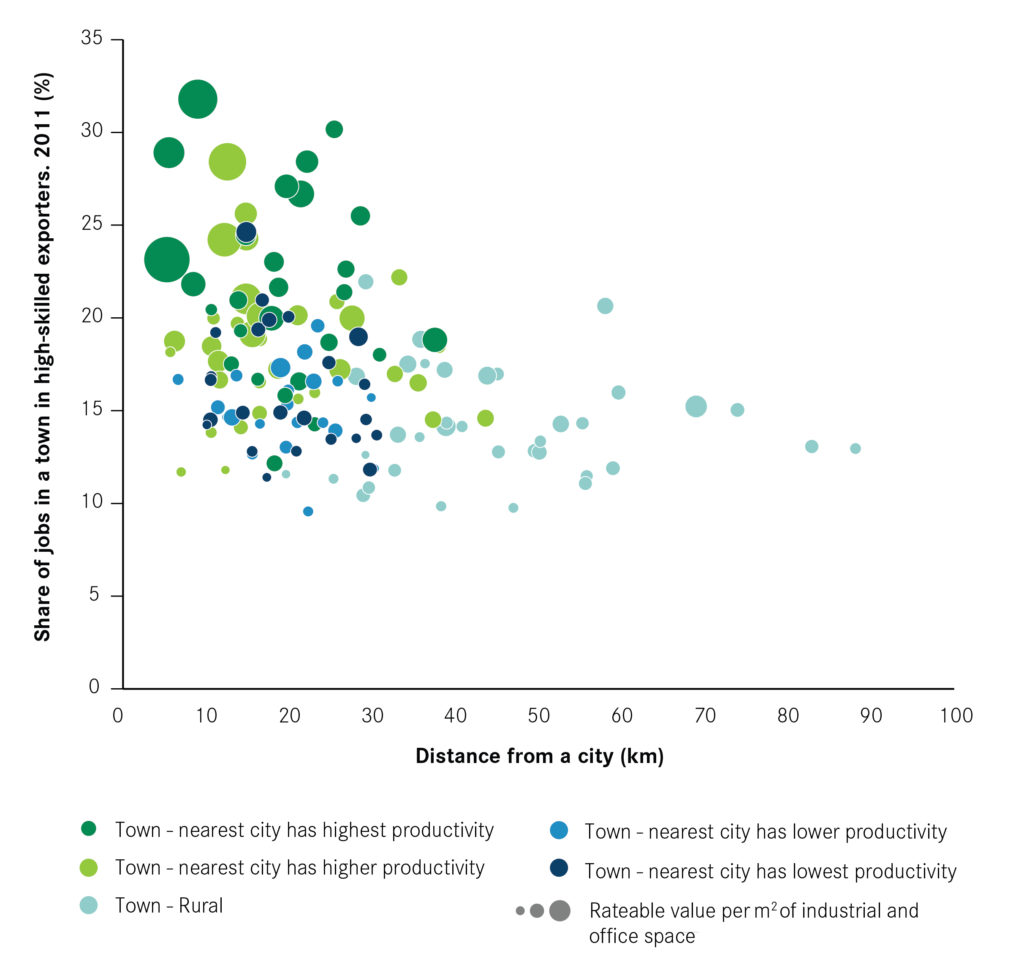 The economic structure of a town, proximity to a city and cost of commercial space

This suggests, somewhat counterintuitively, that the employment outcomes for people in towns are reliant on the performance of their nearest city. And it is the underperformance of these neighbouring cities that explain at least in part of the struggles of some towns.

So what does this mean for the fund? The goal of it should be to improve the employment outcomes of residents of towns, irrespective of where they work. Beyond skills, if it is to have an impact, it should look at improving transport links to the nearest city.

This, of course, will have little impact if the city itself is struggling. And this is why, despite the current interest in towns, the main plank of any domestic policy in a post-Brexit world must be about improving the performance of struggling cities, particularly in the North. This won’t just bring benefits to the people who live in these cities themselves, or to the national economy as a whole. It’ll improve the employment outcomes for people living in the surrounding towns too.

The fundamental question that any fund will need to answer – be it the National Productivity Fund, the Stronger Towns Fund or the Shared Prosperity Fund – is what is the nature of the problem that it is attempting to solve? If the problem is one of inclusion, then it will need to be targeted on the people and places that are currently excluded. If it’s about economic growth, then it needs to note that not everywhere can or should be expected to play the same role in the economy.