The government has today announced that the minimum wage will increase from £6.50 to £6.70 in October this year. With inflation forecast at 0.5 per cent, this represents the largest real-terms increase in the NMW since 2007. This is good news but the impact of this national change will vary considerably across the UK. This variation has prompted many in London in particular to think seriously about the introduction of a city minimum wage – something that many US cities and states have already done. Their experience potentially holds a number of lessons.

Why have US cities introduced their own minimum wages?

In many of the largest metropolitan areas in the US, the Federal Minimum Wage (FMW), which has remained at $7.25 since 2009, is less than a third of average wages. It’s around 26 per cent of average wages in Seattle and 24 per cent in San Francisco. In other words, it has very little ‘bite’ or impact.

Figure 1: Ratio of the Federal Minimum Wage to Median Wages in US cities, 2013

Source: US Bureau of Labor Statistics, 2015

As a result, several cities in the US, including San Diego, San Francisco, Santa Fe and Seattle, alongside 29 states and Washington DC, have introduced their own minimum wages (as I’ve written about previously) in an attempt to combat rising inequality and improve standards of living for low wage workers.

What are the economic impacts for city minimum wages?

Some of the thinking associated with city minimum wages was debated at the Resolution Foundation earlier this month, where Arindrajit Dube, Professor of Economics at the University of Massachusetts, presented his research on the economic impacts of minimum wage setting in different US states.

Whereas cities have introduced minimum wages more recently, a number of states have had their own minimum wages since the 1980s. Long-running variations in minimum wages across US states allowed Professor Dube and his colleagues to look at the economic impact of a 10 per cent increase in the minimum wage for both the restaurant sector (one of the largest low pay sectors here and in the US) and teens (who tend to be among the lowest paid).

Table 1: Impact of a 10 per cent increase in the minimum wage

The impact is largely positive. In both cases, a 10 per cent increase in MW increased average earnings by at least 2 per cent and decreased the staff turnover rate by at least 2 per cent – meaning the costs of recruiting and training new staff were reduced. There’s also early evidence that it’s led to higher firm productivity. Prices rose in the restaurant sector as a result, although this should be easier to absorb in high wage cities.

The emerging evidence from San Francisco and Santa Fe, where minimum wages were introduced in 2003, shows no evidence of appreciable jobs losses or business relocation away from these cities. Its introduction has led to a reduction in wage inequality. Nearly a quarter of workers in San Diego, San Francisco and Seattle were affected by the introduction of a higher minimum wage – and its bite has nearly doubled.

What does this mean for the UK and for cities like London?

The national minimum wage (NMW) in the UK has more bite compared to the US, but again there is huge variation across the country. The minimum wage is 39 per cent of mean wages in the UK compared to 27 per cent in the US according to the OECD. Yet the bite of the NMW, currently set at £6.50, varies significantly between cities. The NMW stood at 43 per cent of average earnings at national level in 2014. In Bolton it was 53 per cent, while in London it was 33 per cent. A London MW would need to be set £2 higher at £8.50 if it was to have the same level of bite as the national average.

Figure 2: Ratio of the National Minimum Wage to Median Wages in UK cities, 2014 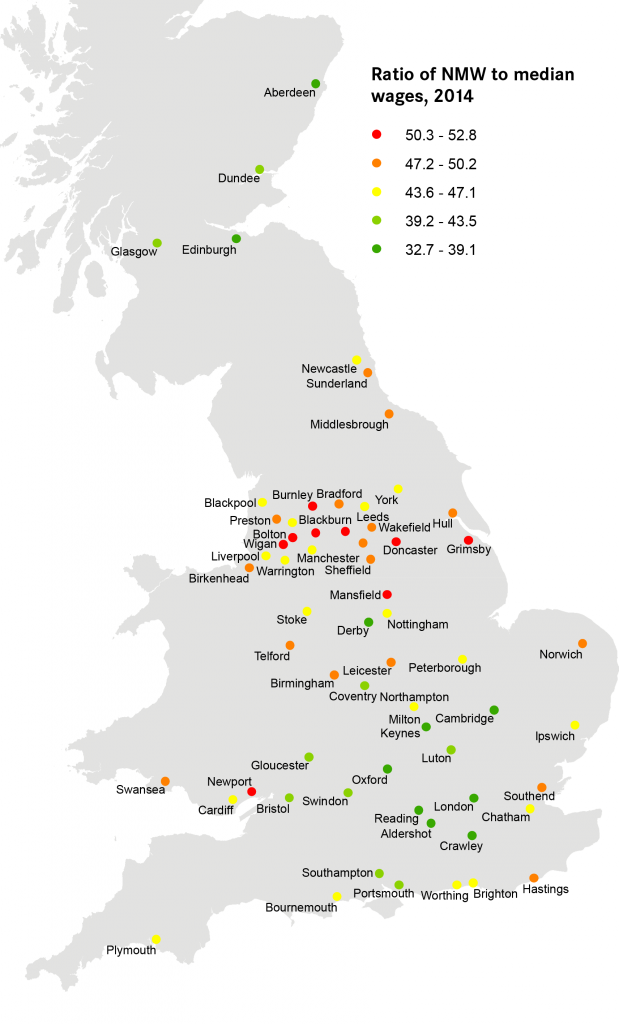 The Low Pay Commission closely follows the bite of the NMW because it provides an indication of how many workers are likely to be affected and whether increases to the NMW are likely to affect employment.

A London MW could help raise living standards for low earners. While workers in low pay jobs in London tend to earn more than other areas, the cost of living in the capital is far higher and it’s rising. Average earnings among the 10 per cent lowest paid in the capital have also fallen relative to average earnings.

Evidence from the US suggests that it is possible to introduce city minimum wages without any significant impact on employment, although it is perhaps important to continue to have a separate youth MW. Kitty Ussher estimated that London could support a 7 per cent increase over and above the national minimum wage, rising to 20 per cent over time with no impact on jobs. The Low Pay Commission currently only looks at the potential impact of increases to the NMW – so there haven’t been any official studies completed.

In many ways, given the different contexts, the US experience raises more questions than answers. Whilst the interest in introducing city minimum wages continues to grow in the UK, it should be approached with caution. There are concerns that the introduction of a London MW could lead to downward pressure on increases to the NMW which may be of detriment to other areas. While there is limited evidence of city MWs leading to firm relocation in the US, it is not clear how it might play out in a smaller country like the UK. For others, given the significant regional imbalances in the UK, there is concern that the introduction of a London MW might end up exacerbating these inequalities.

Ultimately, minimum wage setting will only go so far to address standard of living issues in high cost cities like London – the cost of housing, transport and childcare all have significant impacts on low earners. Policy makers also need to support low earners to progress into higher wage jobs. But given that all of these issues require a long-term approach, city minimum wages may help to alleviate in-work poverty in high cost cities in the short term.

The minimum wage has to be based on what the economy can support rather than the cost of living. The strength of the Low Pay Commission is its independence and its reliance on evidence – and this has to continue. There is a strong case for the next government to widen the remit of the Commission as we’ve suggested before, however, so that it can work with cities like London to assess the potential impact of city minimum wages on city economies and other parts of the country.