Looking at the performance of Brighton and Wakefield in the decade before the downturn shows that there is little to tell the two cities apart – both created many thousands of private sector jobs. But as our two new briefing papers on the cities show, the nature of this growth was very different.

Between 1998 and 2008 private sector employment in both cities increased by over 13 per cent. But the major difference between Wakefield and Brighton is in where these jobs were located. Figure 1 shows that in Brighton most jobs were added in the city centre, while the rest of the city saw modest growth or even decline in employment. And over half of all the new jobs were created in knowledge intensive business services (KIBS) activities.

The Wakefield picture is radically different. In the decade prior to the recession most of the additional jobs created in the city were located along motorways where new logistic centres and warehouses were expanding rapidly. By contrast the city centre added just seven extra jobs over the decade and its share in overall private sector employment fell from an already modest 14 per cent down to 11 per cent.

These contrasting growth patterns have had a strong impact on the spatial makeup of the economies of the two cities that we can observe today. Figure 2 shows very clearly that private sector employment in Brighton is much more concentrated than in Wakefield.

Figure 2. Location of private sector jobs in Brighton and Wakefield (2011) 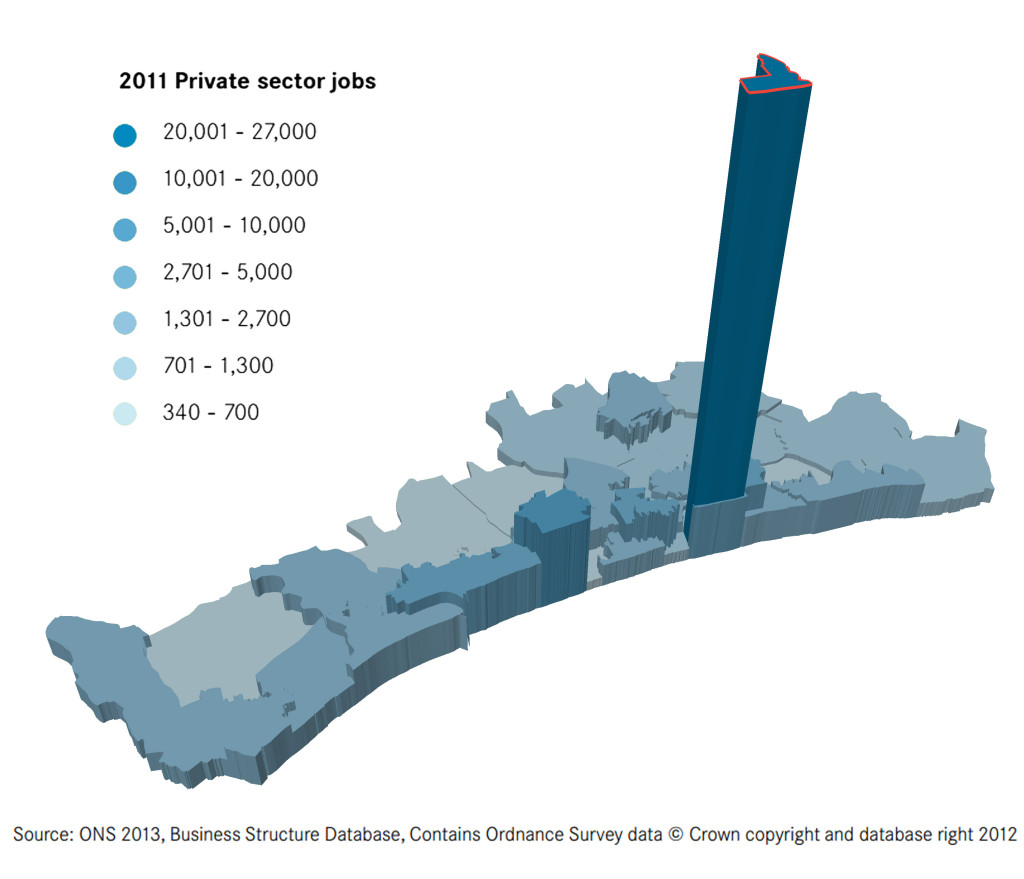 But does it matter? In the end all additional jobs in our cities are welcome, no matter where they locate. In the short run employment growth creates opportunities for a city’s residents, irrespective of where new jobs locate. But in the long-term a decentralised pattern of development may have negative impacts on future economic performance.

In our recent report Beyond the High Street we show that dense city centres provide an environment in which businesses can be more productive. Places like central Brighton help businesses easily access information and ideas of other firms either through formal meetings or informal interactions in cafes, bars or around water coolers. This feature of city centres makes them particularly attractive to KIBS businesses, such as lawyers, bankers, fashion designers and software developers, because they rely on rapid access to information.

These jobs tend to pay more, are harder to replace with machines and are less susceptible to being outsourced than for example jobs in logistics hubs or call centres. As the UK continues to specialise in higher-value, higher-skilled activities, cities with dynamic city centres densely populated by KIBS employment, like Brighton, are likely to have stronger future growth prospects than cities where employment is lower-skilled and lower value-added and is spread across wider areas, like in Wakefield.

Previous blog in the series: Beyond the High Street: The economics of independent shops

Next blog in the series: Beyond the High Street: Patterns of growth in Birmingham