Amongst the controversy about the upcoming changes in business rates, one topic that has attracted particular ire has been the cuts to Amazon’s business rates, which has been contrasted with the reported increases in rates for some small retailers. But are these criticisms fair?

Data from CVS (which specialises in advising businesses on rates) reports that six of Amazon’s nine sites are going to see a fall in their business rates from 1st April. Of the plants that will see a decrease, our calculations suggests that most will see a fall of between 1 and 4 per cent, but that the company’s Swansea facility will benefit from a 17 per cent decrease equivalent to £190,000 (assuming it receives no transitional relief).

However, there are a number of qualifying factors worth noting when considering the rates that Amazon will or should pay.

Firstly, the scale of the decrease in rates that most Amazon’s facilities face is on average smaller than for high street retailers. Our analysis shows that in 51 out of 58 city centres, on average retailers will see a fall greater than 4 per cent. Even when considering the 17 per cent cut to Amazon’s Swansea site, there are 33 city centres that will see an even larger fall, including Swansea’s own high street.

This brings me to my third point. The average increase in the business rates bill for retailers in central London is set to substantially increase, by around 50 per cent (not taking account of transitional relief, which the Chancellor is likely to announce extensions of in the Budget). But this is how taxes levied on land work – they tax land more where it is at a premium, such as in central London, than they do in places where it is not – like the fringes of Swansea.

Indeed, this is why businesses in these places choose to locate where they do – those based in out-of-town areas do so because they don’t want to pay high rents and rates, while those in central London show they are prepared to pay high prices for the benefits that the location brings to their business.

Of course the manner in which the business rates revaluation has been conducted isn’t sensible, as it has resulted in some larger London businesses facing ‘cliff-edge’ increases in business rates because revaluations of their properties have been such a long time coming. For example, businesses such as Harrods and Selfridges will see a 50 per cent increase in their business rates without relief, amounting to £6m and £5m respectively, and behind Hinckley Point are the largest absolute increases of any property in England and Wales.

This is why more frequent revaluations are needed – the business rates system isn’t defunct in an ‘internet-age’, as some MPs and commentators have claimed, but it does need improvement. 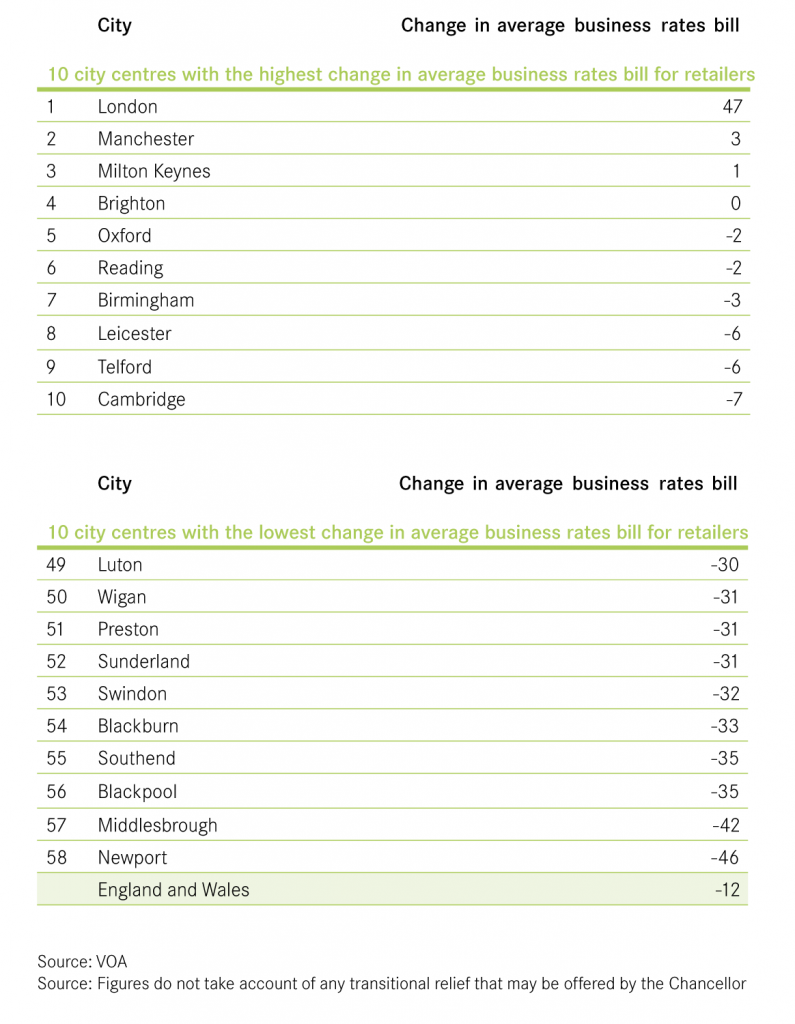 When it comes to tax, there is a great deal that Amazon could be criticised for. But rather than criticise its business rates bills, those who want the company to pay more tax should look to close the loopholes that Amazon is exploiting for other taxes. The business rates system is by no means perfect – and we have made a number of suggestions on how it should be improved – but it is functioning as it was set up to do – just as Amazon’s retailing model (along with that of clothing company ASOS and domestic appliances retailer ao) was set up to avoid paying the high rents and rates of places like central London.

You can see more of our analysis on what the business rates changes mean for businesses in different cities in our new briefing.