Despite the economic recovery gaining pace, concerns remain on both sides of the Atlantic about the nature of that recovery – consumption dependent, flat-lining wages, and low investment.

In the context of these concerns, earlier this week the Brookings Institution released their latest report looking at the special importance of what it describes as America’s “advanced industries” (AI) sector to the nation’s economic future.

The report provides an overview of the advanced industry sector, outlining its role in supporting America’s prosperity, key performance trends, and maps its metropolitan and global competitive standing before suggesting high-level strategies to improve its performance.

The AI sector encompasses 50 industries ranging from manufacturing industries,such as automotive and aerospace, to energy industries, such as oil and gas extraction, to high-tech services, such as computer software and computer system design – including for health applications. The 50 industries are characterised by their involvement with technology research and development (R&D) and STEM (science, technology, engineering and maths) workers. The report argues that their dynamism will be a central component of any future revitalised US economy. As such, these industries represent the country’s “best shot at supporting innovative, inclusive, and sustainable growth”.

Particularly interesting findings from the report include:

San Jose ( Silicon Valley) leads, with 30 per cent of its total jobs in the advanced industry sector – nearly double the second-placed metro Seattle (16 per cent). Most of the other leading metros in the top 15 are also tech hubs: Seattle, San Francisco, Washington DC, Boston, San Diego and Austin. But some other not so usual suspects also make the list, like Detroit for its advanced automotive tech focus; the aircraft manufacturing center of Wichita, Kansas; the communications hub of Palm Bay, Florida; budding IT star Charleston, South Carolina; and Houston’s energy-enabled complex. 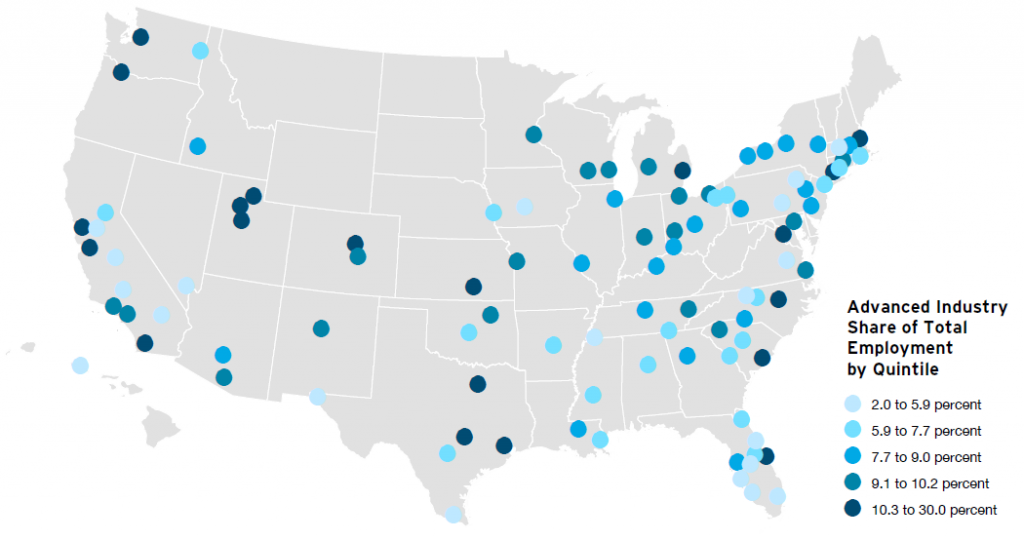 And significantly, the report finds that over the last 30 years, the geographical concentration of the AI sector has been increasing – they are becoming even more spiky. In 1980, 59 of the US’s major metros contained at least a 10 per cent share of advanced industries workers. By 2013 that number had to shrank to only 23 metros.

In turning to what needs to be done to further boost the AI sector, and make the most of its potential to generate productive growth and high-paying employment, the report calls for concerted action on the part of state and metro private, public and civic sector leaders. The need for these leaders to act is given extra weight because of what the report calls ‘federal gridlock’, which is preventing decisive progress from being made. Among other initiatives, they should work together to:

Reflecting on the implication of the report’s findings for the UK, five immediate thoughts come to mind:

First, the importance of knowledge and skills driven economic activity to supporting innovative, inclusive, and sustainable growth across the UK. The UK, like the US, is likely to continue to specialise in higher value knowledge intensive activities. While the UK can’t compete on low cost manufacturing and service activities that can be done more cheaply elsewhere, it is a leader in activities that rely on the production of ideas and knowledge.  Supporting and encouraging the production and use of knowledge and skills is vital to the long-term economic success of the country.

Second, AI industries are vital to the economic future of the US and the UK, but they will never be mass employers.  The report shows that for 30 years, the jobs growth of the AI sector in the US has been broadly flat, even whilst output has grown by 5.4 per cent per annum over that  period – 30 per cent faster than the economy as a whole. Discussions in the UK about the rationale for economic development policies often conflate jobs and growth objectives. Recognising the difference, and inter-relationship, between the two is important when designing and delivering economic development policies.

Third, it’s advanced services, rather than advanced manufacturing, which have led the post-recession surge in the US as it has in the UK.  Since 2010 the American AI sector has added nearly one million jobs. Computer systems design alone generated 250,000 new jobs. Again this does not mean that advanced manufacturing is not important for innovation, exporting, R&D etc. But it does mean it’s the advanced services element of the sector that is likely to drive future jobs growth in UK as it is in the US.

Fourth, AI jobs are not spread evenly everywhere across the US and that this concentration is deepening (or getting spikier). The same pattern of economic activity can be seen in the UK. As our work over the last 10 years has consistently shown, firms, entrepreneurs and workers – particularly those undertaking knowledge-intensive endeavours – increasingly choose to be close to each other because of the agglomeration benefits they accrue. Recognising this, and encouraging public investment and policy solutions that support cross-firm collaboration and the densification of city centres in more cities throughout the UK, will help the AI sector to spread its riches beyond the select few. 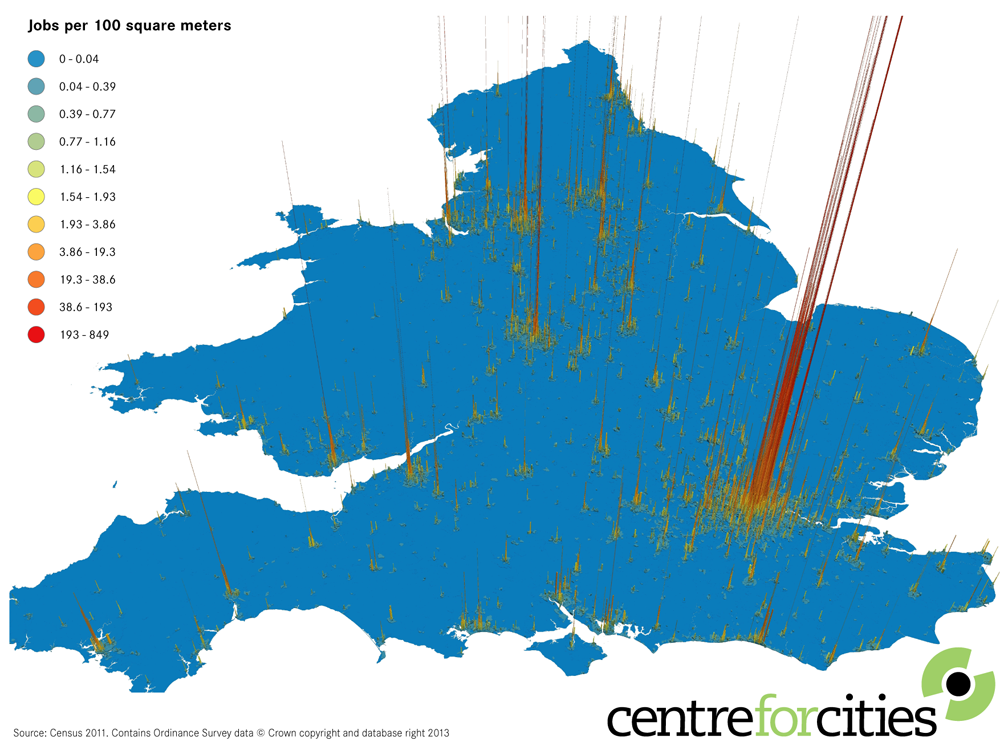 My fifth and final thought is that the report emphasises the need for metro leaders – public, private and civic – to take the lead in designing and delivering the initiatives required to increase the performance and significance of the AI sector in the US. There are obvious echoes to the debates around cities and devolution currently taking place in the UK. If we want to boost the economic performance of our cities, then Central Government needs to loosen its grip on the policy and funding reins; and in return, city, business and civic leaders need to come together to make the policy decisions and investments that support their own advanced industries sectors, for the good of their city and for the national economy.