Last year in “A Marathon not a Sprint” we showed that a successful Olympics does not necessarily mean a successful legacy for the host city. We highlighted that whille the Olympics themselves can be a catalyst for regeneration, it will take many years of hard work for this initial investment and activity to be transferred into visible benefits for Londoners.

We won’t know the extent of the effects of the Olympics for another 10 or 15 years, but as we show in our new Olympics Legacy update there are reasons to be a little bit more optimistic about what the Games could mean for East London.

In the update we looked at private sector employment dynamics in the Olympic park and the area around it in the build-up to the Games. Figure 1 shows change in total private sector job growth within the London Legacy Development Corporation’s core area, and within two mile buffers around it compared to the rest of London for the three years after London was awarded the Olympics in 2005. This was a period of stable growth during which private sector employment in Greater London grew by 8 per cent. The map clearly shows that this expansion was largely driven by explosive growth in Canary Wharf which is within two miles of the Olympic Park. The map also shows that the strong jobs performance of London as a whole and financial services in particular didn’t apply to several of the Olympic boroughs. The six Olympic boroughs lost jobs during this period and the areas directly adjacent to the Olympic Park were among the hardest hit.

Figure 1: Jobs growth in the Olympic Park, its immediate surroundings and Growth Boroughs 2005-2008 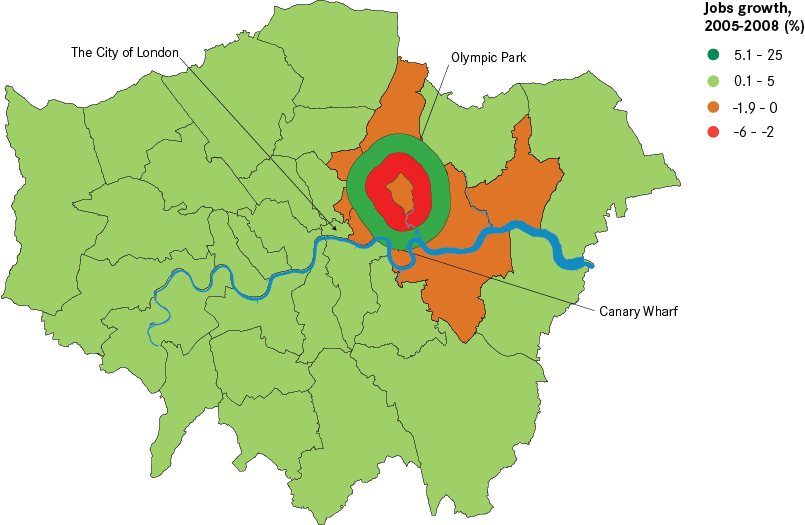 2008 brought the credit crunch and a change in the prevailing economic climate, but it also changed the fortunes of the Olympic Boroughs. As Figure 2 clearly shows, while most of London was losing jobs between 2008 and 2010, there was a slight increase in the number of jobs in the Olympic boroughs which outperformed the rest of the capital.

Figure 2: Jobs growth in the Olympic Park, its immediate surroundings and Growth Boroughs 2008-2010 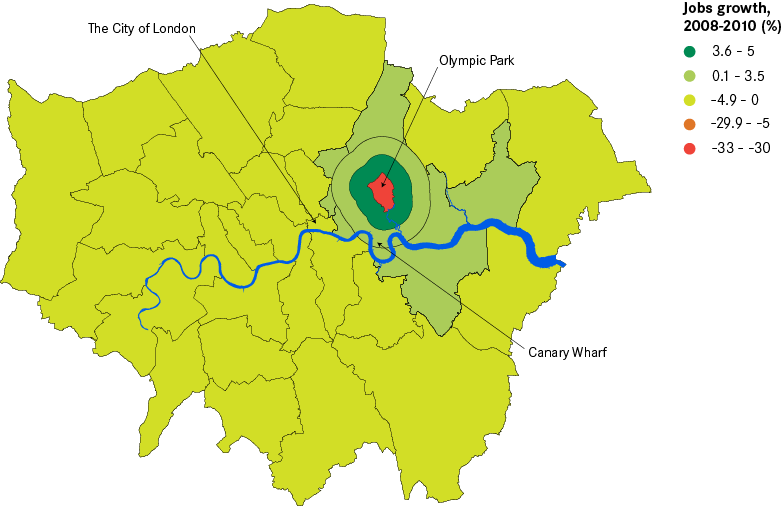 This trend appears not to have been a blip. In the two years prior to the Games (2010-2012) the six Olympic boroughs still performed slightly better than the rest of London, with the areas immediately surrounding the Olympic park way ahead of the rest. The almost 50 per cent employment expansion within the LLDC boundary reflects the low employment base of the area prior to the Olympics designation (two years earlier the whole area was a construction site with no permanent jobs) and the opening of the Westfield shopping centre.

Figure 3: Jobs growth in the Olympic Park, its immediate surroundings and Growth Boroughs 2010-2012 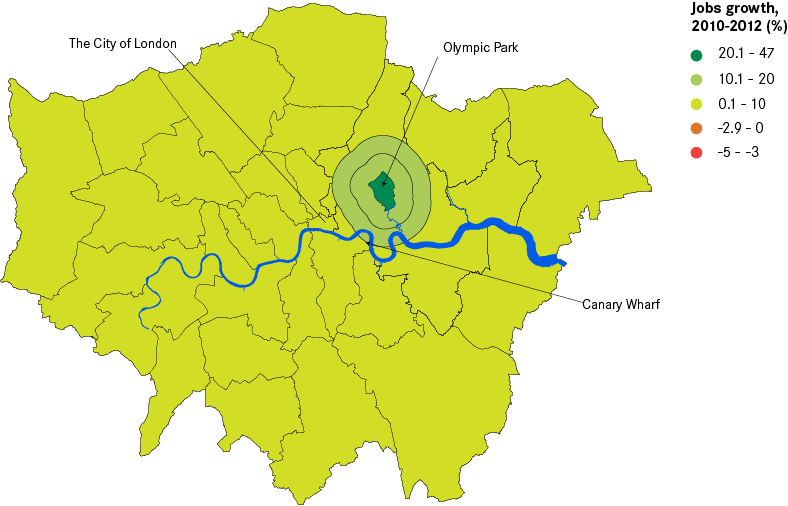 Last year we were critical of the ambition of making the Olympic park a significant business location. But looking at the numbers I would suggest that the outlook for business growth around Stratford station is rather positive. The place is well linked, well publicised and has some of the best infrastructure in the city. BT Sport among others is already there and LLDC is considering allowing more offices to be built within its boundary than originally planned. So with Royal Docks EZ going slowly and White City drifting off the radar, maybe Stratford will be the next growth pole for London.