The pandemic has had a profound economic impact across the country, but if we had to pick a place among the hardest hit by the events of the last 10 months that would probably be Crawley.

Back at the start of 2020 Crawley was among the most economically successful cities and large towns in the country. It was the 19th most productive urban area in the UK and had the 9th highest workplace earnings, while being among the places with the lowest share of people claiming benefits for the primary reason of being unemployed. 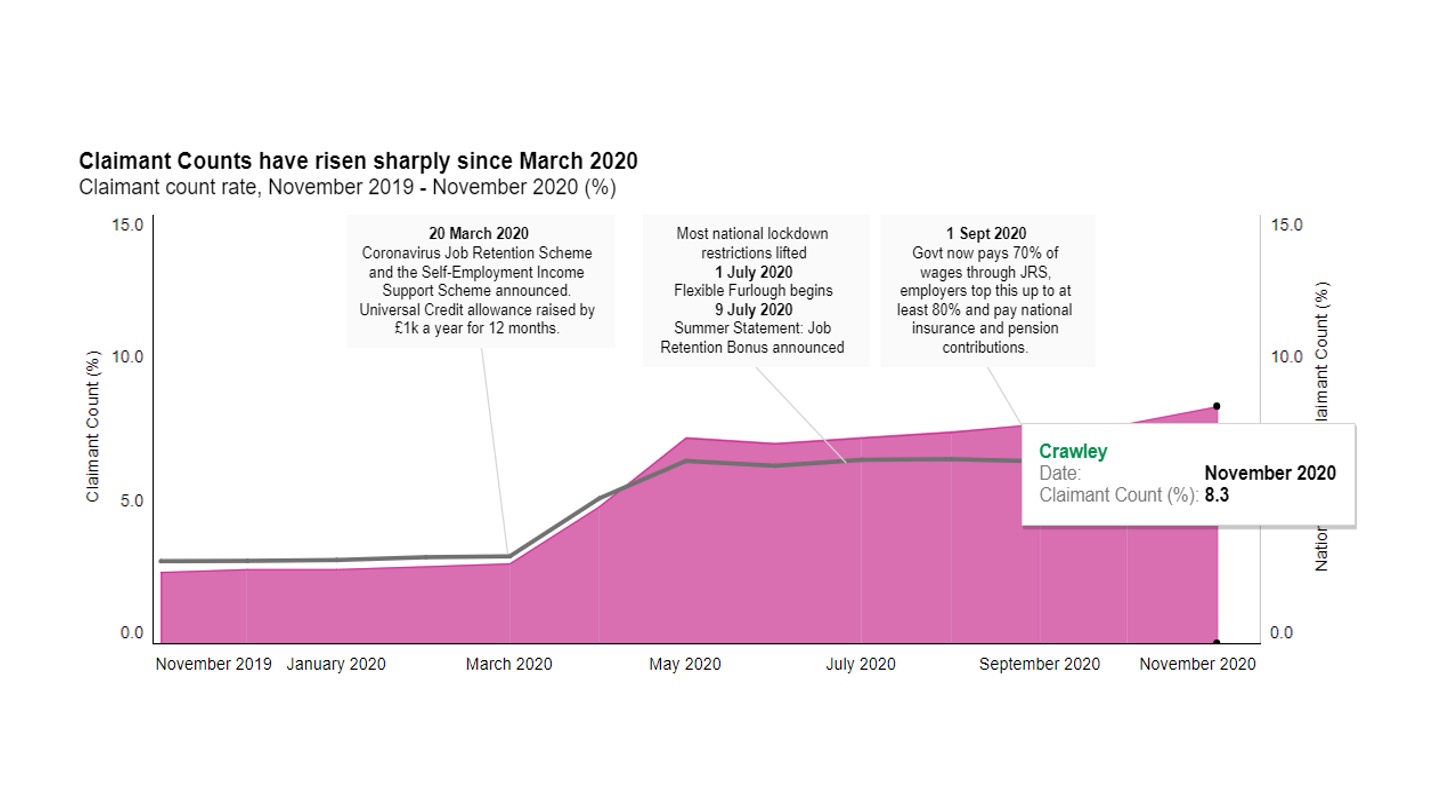 Crawley is also the place which continues to be most reliant on the Coronavirus Job Retention Scheme. As of the end of October, 13 per cent of its residents were still receiving benefits from the scheme compared to the national average of 8 per cent.

The impact of the aviation industry’s collapse

The collapse of the international travel industry is no doubt to blame for this. While the aviation industry accounts for 1 per cent of all jobs in the UK, approximately one in five jobs in Crawley are in this industry.

And this poses a threat to the future economic performance of the town. The aviation industry is one of Crawley’s main exporting industries, bringing money into the local economy that people then spend on shops and restaurants and other local services activities. Unlike in other parts of the country – where the negative effect of the pandemic has been mostly felt on local services activities – this means the pandemic has also affected the exporting base of the town. And this is likely to mean that the pandemic is likely to have a much longer lasting economic impact than in most other parts of the country.

Alongside measures to bounce back from Covid-19, such as a national uplift to Universal Credit and an extension of the furlough scheme for as long as restrictions are in place, Crawley now also needs support to repair its export base – a similar challenge to that faced by many places targeted by the ‘levelling up’ agenda.

The good news for Crawley is that it is in a much stronger position to do this than many cities and large towns further north. Crawley-based businesses have a high-skilled workforce they can call on. The challenge for national and local policymakers will be to make sure that there is enough space available for any businesses it may attract in or see grow locally, as well as sufficient housing to match the demand to live there (Crawley is the 14th least affordable city or large town in Britain).

The Government entered the pandemic looking to level up the UK. Now it needs to avoid a ‘levelling down’ in places like Crawley too.

Coronavirus Future of cities Levelling up Unemployment
How has Covid-19 affected the levelling up agenda?

The pandemic has made levelling up four times harder and it risks levelling down otherwise economically successful parts of the country as well.

Coronavirus Levelling up Unemployment
November update: What do the latest claimant count figures mean for cities and large towns?

Despite claimant count remaining unchanged or declining in almost every city and large town over the past month, places are entering this second lockdown in a much weaker position than in March.

Coronavirus High Streets
Which city centres had the best Christmas, and which had the worst?

Data on credit and debit card spending levels where people spent the most in the run up to Christmas.