The received wisdom in the media is that high streets across the UK are struggling. This is influenced by the financial struggles of prominent stores like HMV and M&S and closures of Toys ‘R’ Us and Maplin.

But the headlines obscure an important point: the woes of the high street are not universal. Rather, our research reveals a large variation in the performance of high streets, even amongst those close to each other.

Take, for instance, Liverpool and Birkenhead. As shown in the map below, the two cities are separated only by the River Mersey, yet are very different in terms of the health of their high streets. While Liverpool has a high street vacancy rate of just 10 per cent, Birkenhead’s is almost double at 19 per cent. A similar divergence occurs in South Wales. 15 per cent of city centre retail units are vacant in Cardiff, far lower than Newport’s 24 per cent. 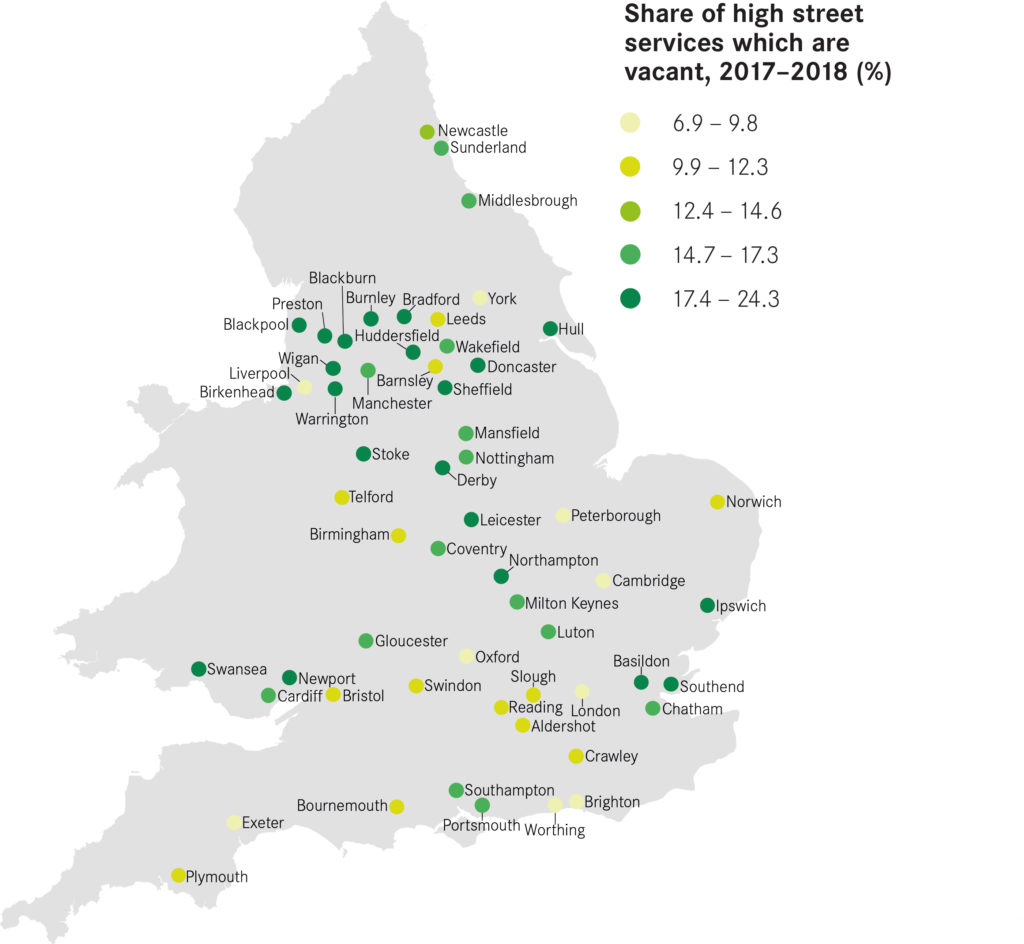 It is not just a matter of empty shops; the type of shops in a city centre matters too. One-quarter of Liverpool’s retail is classed as ‘value’ – such as charity shops or discount stores. This is compared to 40 per cent of shops in Birkenhead. And while Cardiff only has 18 per cent of its shops classed as ‘value,’ 42 per cent of Newport’s shops fall under the same category. Liverpool and Cardiff also have a far higher proportion of premium shops, as seen in the charts below.

Crucially, the relative health of these high streets reflects the strength of the city centres’ economies and their attractiveness to business, rather than being the driver of it. Liverpool and Cardiff have more successful high streets because they’ve been able to attract in more high-skilled businesses than Birkenhead and Newport. Well-paid office workers in these city centres increase footfall and customer spending power. This creates a market for retailers, bars and restaurants to sell to – which leads to a stronger high street.

The proximity of these city centres to each other does raise the rather thorny question of whether one sucks activity away from the other. Undoubtedly people do cross the Mersey from Birkenhead to visit Liverpool’s shops and restaurants.

But this underlines the need to boost footfall in Newport or Birkenhead by increasing the number of jobs in their city centres. Neither is going to pull people in solely as a leisure destination, especially given the strength of their neighbours. And so a better future for the high streets of Birkenhead and Newport will require a focus on the attractiveness of the city centres as places to do business in order to give people a reason to come in.

This pattern is most clearly seen in London. Despite its success, Oxford Street isn’t the only successful shopping area in London, with the City of London and Canary Wharf for example also doing well. The vacancy rate in the latter was less than 6 per cent in 2017/18. Importantly, this is driven by the large volumes of workers pulled in each day, and it’s hard to see how high street services would survive in these areas if it wasn’t for all the office jobs above them.

This means that urban policymakers should not obsess over high street vacancy rates in isolation, but consider retail as one aspect of a diverse economic and cultural offering.  The way to breathe back life into a high street is not with a concerted retail expansion, but to make it a compelling place to invest in and set up business. If the number of high-skilled jobs in city centres increases, there will be more footfall and spend to sustain their high streets and keep shops open.