While the preoccupation with “pasty tax” rumbled on in the background, this morning we turned our attention to the bigger questions on the Budget: does the Government have a coherent strategy for growth and is the economic potential of cities being harnessed to full effect?

Vince Cable set out his thinking on the Budget within the government’s economic growth strategy, highlighting the enormity of the economic “heart attack” that the economy is still recovering from, the importance of stimulating demand and the necessity of easing access to finance, especially for SMEs.  Sir Merrick Cockell, Chair of the LGA, spoke about the role of local government in driving economic growth and the importance of overcoming the culture of dependency that has sometimes characterised local government.

Sir Merrick made reference to the walls of Whitehall needing to come down between central and local government. To me it seems that the walls between Whitehall departments need tumbling down too.  In his speech to launch Cities Outlook 2012, Greg Clark set out clearly that the battle for growth will be won or lost in our cities. We’d agree, and it was disappointing to hear Vince Cable characterise cities by their concentration of deprivation without acknowledging their growth potential.  It is true that compared to their European counterparts England’s Core Cities  – with the exception ofBristol and also Leeds depending on what measure is used – lag behind the national average. But the Core Cities and London together generate 49.5% of the country’s GDP and the sheer scale of these cities means they have significant economic potential, which Government policy simply isn’t capitalising upon. 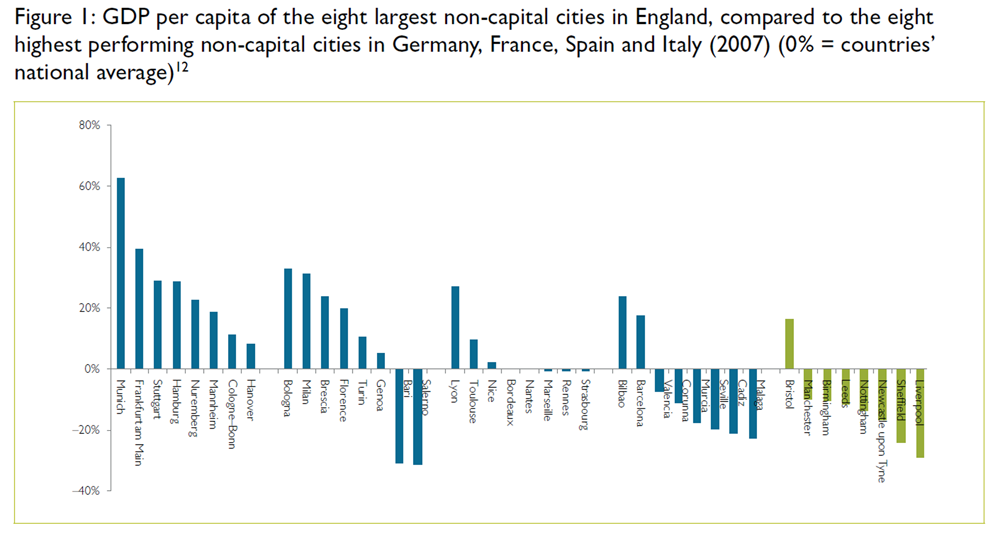 It’s also vital for Government to have a strategy that goes beyond the Core Cities:Cities Outlook 2012 identified the successes of smaller cities such as Cambridge, Milton Keynes and Aberdeen.  In all, cities generate 61% of UK GVA and the GVA per head of the top performing cities – Aberdeen, Edinburgh, Cambridge, London and Oxford – was at least 150% higher than the UK average in 2009.

There was agreement that there is more need for place-sensitive and flexible policy making. Vince spoke – as he has at Centre for Cities events in the past – about his time as a councillor in Glasgow and the creativity and energy that allowed local government at that time to flourish, and sometimes to make their own mistakes too.  Arrangements such as the tri-borough model in London and Manchester’s combined authority show local government innovation at its best. Giving cities the tools they need to cooperate, innovate and fulfil their growth potential has to be part of the solution to the challenges facing the national economy.