In recent months, Bristol City Council has discussed the possibility of implementing a Workplace Parking Levy (WPL). This idea is not new, it was initially talked about in 2011 but unlike Nottingham – the only city with a WPL – it has not been introduced.

Centre for Cities has previously recommended and supported a WPL as a form of tackling car congestion. Postponing the introduction of these levies is very understandable, especially in a period of post-pandemic recovery. That said, there are real costs associated with delaying a WPL: more congestion and less fare revenue to fund public transport improvements.

Among the largest cities in the UK, Bristol has one of the highest rates of private-vehicle commuting (2011). This has negative public health consequences, associated with poor air quality, and also brings serious challenges to reaching carbon neutrality by 2030.

According to the Met Office, Bristol was one of the cities with the poorest air quality in the UK ranking fifth out of 63 cities and large towns (2018). Moreover, the existing levels of car-reliance contribute to high transport-related carbon emissions. Figure 1 shows that there has been little progress on this front in the last decade.

Figure 1: In terms of transport-related carbon emissions, Bristol has been mostly unchanged since 2009 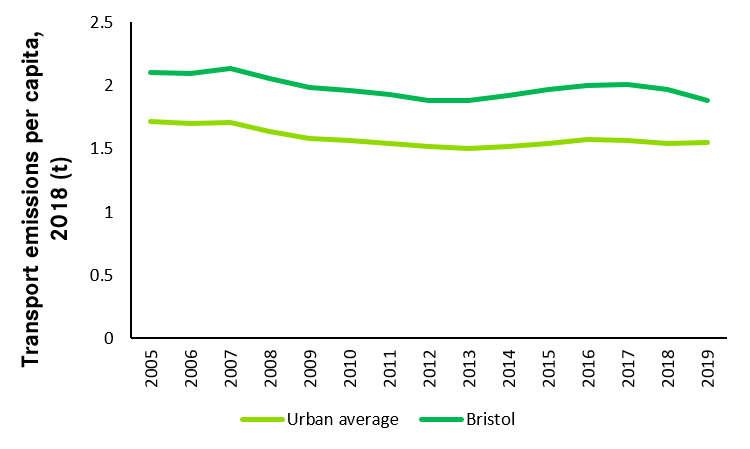 A WPL, like any other measure that disincentivises car use, would not entirely solve the issues outlined above but it would likely make a positive contribution towards reducing congestion. Evidence shows that London’s congestion charge (albeit a slightly different approach to a Workplace Parking Levy) reduced traffic, improved public transport and therefore reduced air pollution and carbon emissions. An assessment from the West of England Combined Authority (WECA) estimates that a WPL would reduce private-vehicle trips by 2 per cent.

Since 2012, £96 million in potential WPL revenue was lost in Bristol

In 2011, both Nottingham and Bristol city councils analysed the possibility of introducing a WPL but only Nottingham subsequently did this. From 2012, Nottingham City Council, which is smaller than Bristol both in terms of population and GDP, started collecting around £9 million a year with minimal operational costs. Simple estimates suggest that if Bristol had implemented a WPL in 2012 – collecting £11 million per year as estimated at the time, with small businesses exempt – it would have collected around £96 million between 2012 and 2019, which is £16 million more than Nottingham’s (Figure 2).

Figure 2: A workplace parking levy in Bristol could have raised almost £100 million over the last decade 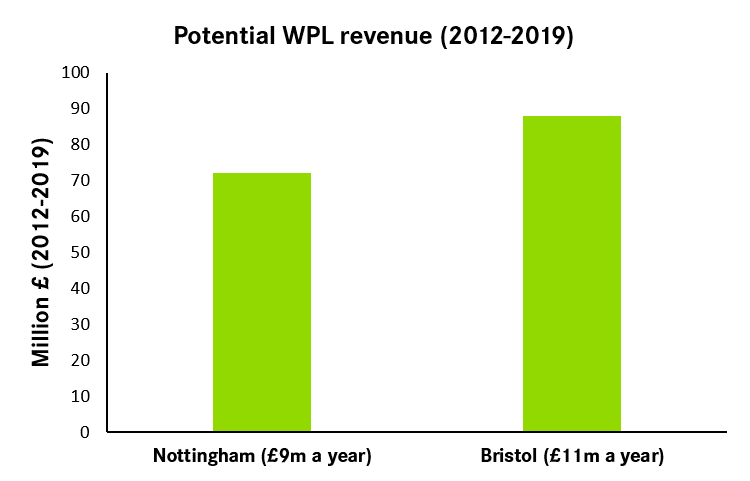 Source: Nottingham City Council; Bristol City Council; Centre for Cities calculations. No revenue estimates for 2020 and 2021 due to potential Covid-19 disruptions and exemptions.

The revenue lost could have been used to improve Bristol’s public transport accessibility, which underperforms similar-sized Western European cities. For example, Nottingham has already committed £220 million of WPL revenue to bid for £432 million in external funds, in order to expand the city’s tram network.

A simple estimate shows that Bristol would have got £800 million committed in public transport investments, if the city council had struck similar public transport deals to those in Nottingham (see Figure 3 methodology for further details). In terms of magnitude, this would be 48 per cent larger than what was recently announced for the WECA, over the next five years, for schemes such as a fully prioritised bus route between Bristol and Bath.

Figure 3: Nottingham’s tram expansion investments, partially funded by its WPL, are greater than the newly-announced public transport investments for WECA. 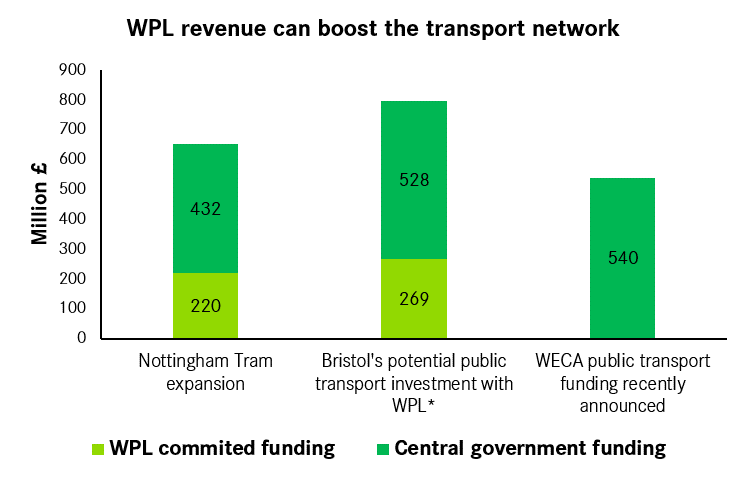 Source: Nottingham City Council; HM Treasury; Centre for Cities calculations. *Methodology: Bristol’s WPL studied in was expected to raise 22.2 per cent more revenue (£11 million) than Nottingham’s (£9 million). The second column estimate assumes that Bristol City Council would be able to commit 22.2 per cent more WPL funds than Nottingham and the external funding would continue to two-thirds of the overall funding.

In such policy debates it is the losers, in this case the motorist lobby, that tend to shout the loudest. But there are costs to not taking action. While it can feel somewhat tangential to consider time lost sitting in congestion – or even the pollution and carbon emissions that could have been avoided –   there is a large amount of forgone revenue that could have been invested.  Bristol could have done a great deal with the £96 million it hasn’t raised over the last 10 years. British cities should not forget that when looking to tackle congestion in the future.