London’s huge success as a place to live and do business has brought with it an overheated property market and sky high prices, and this has as much to do with planning as a lack of development.

London clearly needs to provide more residential and office space. Its housing market is already among the least affordable in the country (an average house is worth almost 17 times the average annual salary of a Londoner) and commercial prices are 2.3 times higher than the national average. And as the population is likely to grow by another 70,000 inhabitants each year, without fast action, the situation will only get worse.

There are a number of planning policies that restrict urban growth and threaten the development of the capital. With demand to locate in London unlikely to abate any time soon, these policies increasingly threaten the economic success of the city, and the benefits they bring to the city are becoming questionable.

There are a number of protected panoramas, linear views, townscape views and other river prospects that cross over the capital. Many of them converge on St. Paul’s Cathedral and the Houses of Parliament, which makes tall buildings particularly difficult to develop in some parts of central London, despite being sought-after locations for businesses. But protected sightlines can cause problems for development even beyond the restrictions. Last year locals from Richmond (south-west of London) protested against the approved building of a 42-storey tower in Stratford (which is about 18 miles away) on the grounds that by appearing behind the Cathedral, it was damaging the protected view from Richmond Park to St. Paul’s.

The green belt restricts land supply in the capital by preventing the city from expanding outwards. But containing growth within the city does not necessarily make it more compact. As our research shows, housing demand leapfrogs to the other side of the green belt, generating longer commutes and, ironically, higher environmental costs.

Contrary to the two previous points, permitted development rights (PDR) relax rather than restrict development, but this can create as many problems as it solves. Put simply, one feature of PDR is that it makes it easier to convert commercial space into residential units. In London, take-up of PDR has been high in some boroughs, with more than 10 per cent of the existing office stock in Sutton and Lewisham being converted into residential space since the policy was introduced in 2014, as shown on the map below. 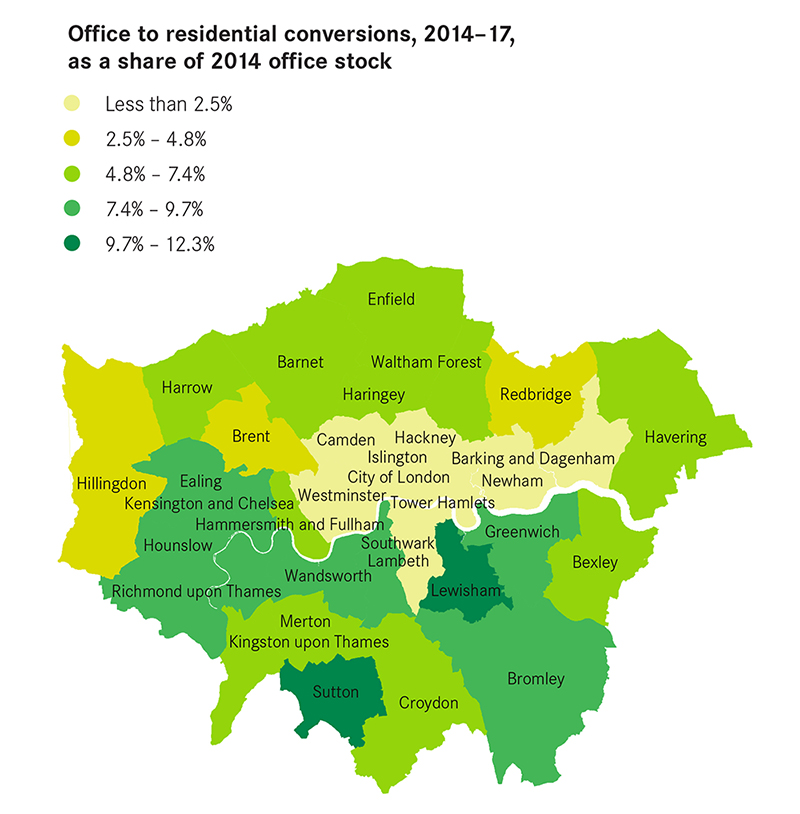 Source: MHCLG, 2018; VOA, 2018. Note that the centre of London is exempted from permitted development rights which explains the null or low take up.

It is true that PDR conversions help to increase the housing stock in the capital. But where demand is very high, it can also threaten viable office space, in particular for smaller or more affordable premises, and can even disrupt the night time economy. That the London Plan encourages local authorities to apply for PDR exemption indicates the potential danger of the policy.

A fresh view on planning policies

Individually, all these policies have flaws, and collectively they make the task for London extremely difficult. The capital needs more houses and more offices, but there are no plans to build outwards – the Mayor is committed not to build on the green belt – and there are restrictions on building upwards. This creates a shortage of available land for development, increasing land value and creating competition between residential and commercial uses – competition that usually flips in favour of residential use because of PDR.

In order to deliver more developments and respect its planning commitments, London’s current strategy is to densify and redevelop land, which in theory would allow the city to provide more houses and more office space without extending out. This is a welcome and necessary strategy, but it is unlikely to deliver enough to meet the urgent growth needs because densifying is difficult and takes time to achieve. The best proof of this is that, by pursuing this strategy almost exclusively in recent years, London has consistently failed to meet its housing targets. Last year London boroughs delivered about 39,600 net new dwellings, below the existing target of 49,000 set up by the current London Plan, and significantly lower than the new 2017 Strategic Housing Market Assessment target of 66,000 per year.

So as pressure increases year on year, planning restrictions can no longer be preserved. The green belt and protected sightlines were created decades ago, at a time when land pressure was considerably less acute. But while the social and environmental considerations that led to implementing them at the time are more important than ever today, other social considerations – such as the right to affordable housing – must now be considered too.

In particular, strategic reviews of the green belt should be conducted with regards to current needs, and to subsequently release a limited, controlled amount of land for development. Given the context, this is the only way to provide enough new homes, preserve adequate commercial space and sustain London’s economy.

Want to receive updates on our research and analysis? Keen to be the first to hear about our upcoming events?  Sign-up for our fortnightly newsletter here.