One joy of a rare winter election is that it is now only four and a half months until the next chance for people to vote: May 2020 will see nearly 17 million people in England choosing city-region mayors in Greater London and Manchester, West Midlands, Liverpool City Region and Tees Valley.

The mayors elected next year are likely to be the major recipients of the increase in infrastructure spending promised during the general election and despite the differences in the geography and voting systems, Thursday’s vote offers us some clues about what could happen in May.

Whether Labour or Conservative, the results on Thursday were a largely good omen for the incumbent metro mayors.

For the Labour mayors in London and Liverpool, the walls of their electoral fortresses are now even harder to breach: Labour’s vote share across parliamentary constituencies in both city-regions exceed those of the first-round results in 2016 and 2017 respectively. 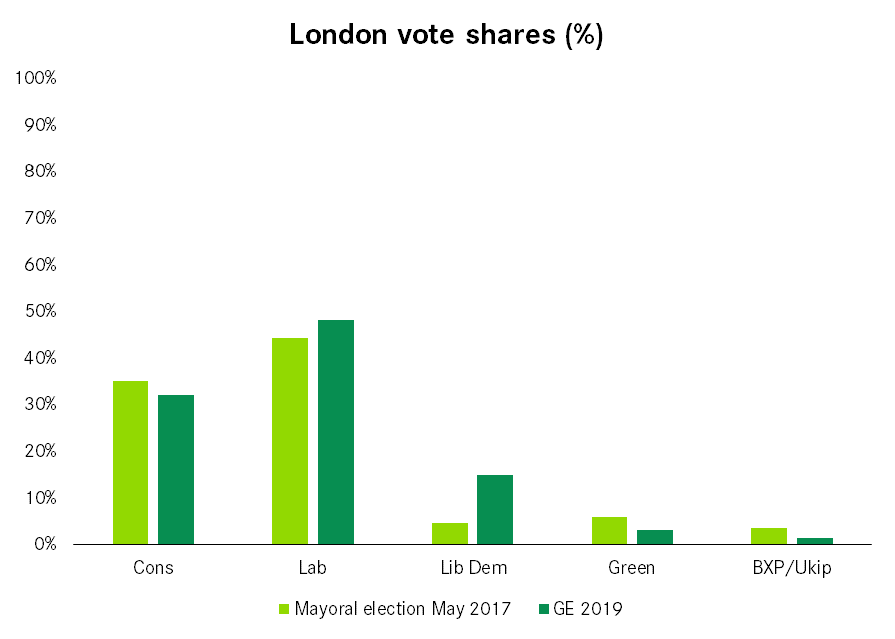 London was the site of Labour’s only electoral gain in the general election, in Putney, and it is hard to spot any residual affection among voters for the Prime Minister’s eight years as Mayor. In fact, on these figures, Sadiq Khan would be close to a first-round victory. The poor results for Johnson in London last week perhaps highlight the role that disaffection towards Ken Livingstone played in the 2008 and 2012 results. Defeating unpopular left-wing Labour opponents with strong appeal in inner city areas appears to be a wildly successful electoral niche for the Prime Minister.

While the Liberal Democrats’ partial revival should see them retake the third party position in London next year from the Greens, they are unlikely to knock the Conservatives out of second place, let alone win a clean sweep to the Mayor’s office – as some had been hoping earlier this year. It remains to be seen how Conservative-turned-independent Rory Stewart will perform next year.

Meanwhile, in Liverpool the Prime Minister was never likely to prove popular. Labour managed to increase its vote share from huge to humungous. Of all the metro mayors facing re-election battles, Steve Rotheram is the most likely to win.

The Conservatives saw a tiny increase in the vote share, likely as a result of the 10% increase of their incumbent MP in Southport. But the Liberal Democrats, who once ran Liverpool City Council, and the Greens failed to make progress. 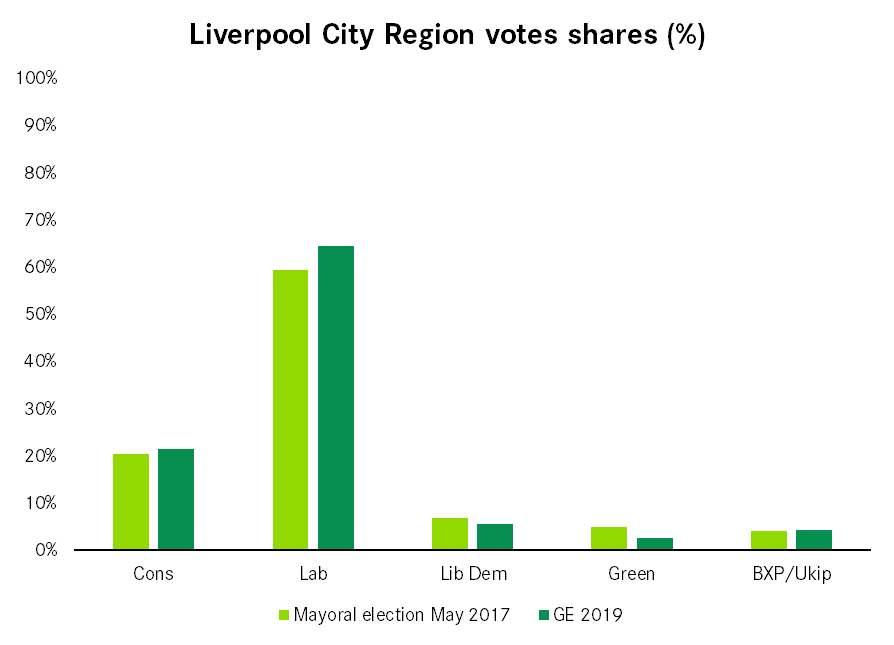 The other Labour incumbent mayor, Andy Burnham in Greater Manchester, will be less relaxed by the results.

Greater Manchester saw the largest change in votes of any city-region voting next year. What was a 40-point gap is now just 13 points. Labour’s vote share fell by 16 points, while the Conservatives’ rose by 12 points.

Had he still been an MP, Andy Burnham might have had his ‘Portillo’ moment, with his old seat of Leigh falling to the Conservatives, alongside other losses in Bolton, Bury and Rochdale.

A ‘love-bomb’ strategy to voters in newly won seats with infrastructure spending and visits from Boris Johnson over the coming months could pose interesting questions to Burnham on how to engage. 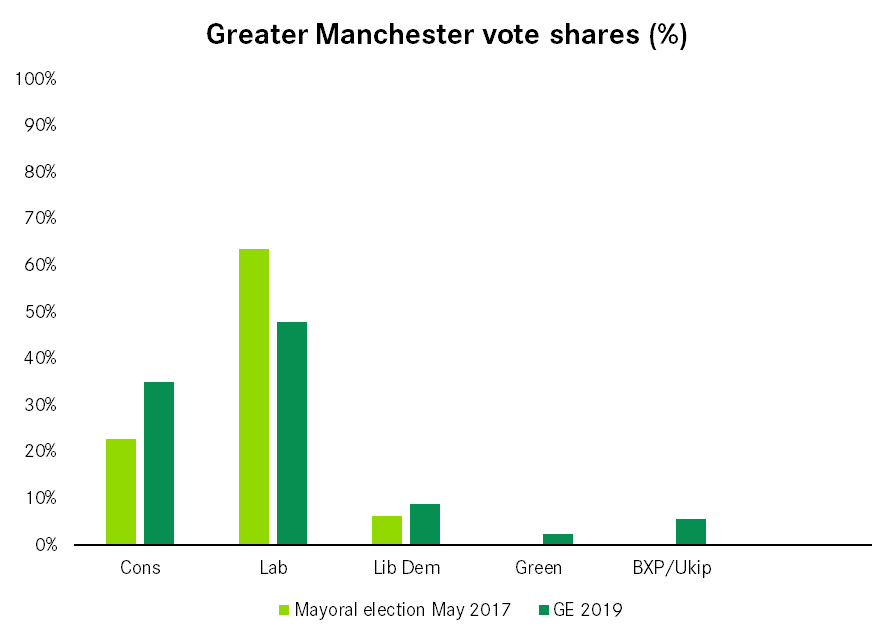 Shock Conservative victories in 2017 can be repeated

For the Conservatives, their metro mayoral victories in May 2017 now look more like a foretaste of Labour’s problems than a flash in the pan that dissipated after Theresa May’s disastrous short campaign in the General Election just weeks after.

What was to many a shock result in Tees Valley in 2017 now looks more likely than not to be repeated in May, as ‘shock’ results extended into long-time Labour parliamentary seats like Darlington and Redcar. Good news for Ben Houchen, but troubling for his Labour opponent, Jessie Joe Jacobs. 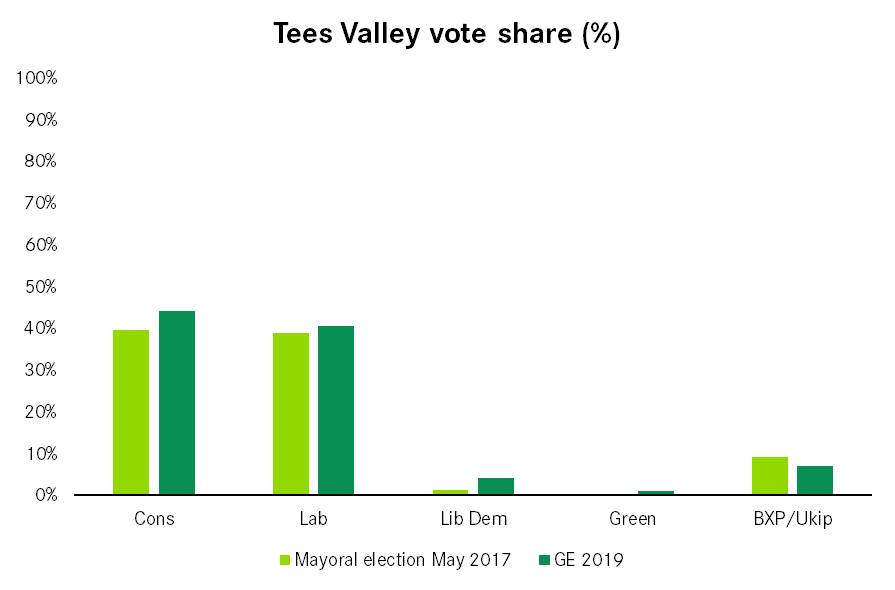 Andy Street, the mayor of West Midlands, also looks set to benefit from the return to the May 2017 highwater mark.

Another photo-finish is on the cards – despite multiple gains in seats across the Black Country, like before Street will have to overcome 30,000 vote Labour majorities in Birmingham Hodgehill and Ladywood to retain his office. Labour’s choice of candidate will be crucial to winning back this historic heartland, and indicating the direction it plans to take after last week’s historic defeat.

Everyone needs a break from politics over Christmas. But for residents of the biggest English cities, it won’t be gone for long. 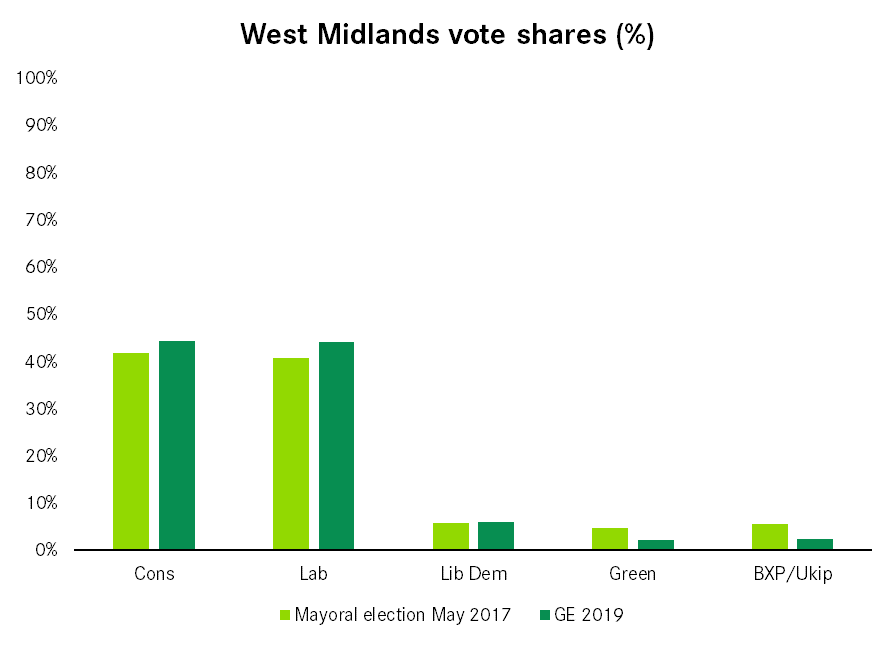 Devolution Levelling up Mayors
Levelling up Productivity
Is GDP a good measure of wellbeing at the local level?
Housing Levelling up
City centre regeneration shouldn’t focus on housing